Single-classed thieves (particularly unkitted ones) are quite boring at high levels. Regardless of how good or bad they are, what makes them boring is that there isn't much for them to do with the high thieving skill stats they have. Since having more than 100 in Open Locks, Find Traps, Detect Illusions, and Set Traps is almost completely pointless, as thieves attain high levels there reaches a point where there isn't much advantage in using a single-classed thief over a multi-classed one, or an unkitted thief over an assassin or bounty hunter, since even the latter can max out their skills one way or another by that point.

This mod has multiple components that give thieves things to do with thieving skills over 100:

An epic lock is a lock that requires a lockpicking skill of over 100 to pick. This component turns many magical locks that previously couldn't be picked into epic locks that can be picked, allowing for some minor sequence breaking if you have a master lockpicker in your party. Epic locks cannot be unlocked by a Knock spell (that would be too easy); they can only be picked. However, you can still unlock an epic lock through any way it could previously be unlocked (whether by a plot event or using a key), so this component will not make it impossible to complete the game if you don't have a thief. Examples of epic locks in this mod include: 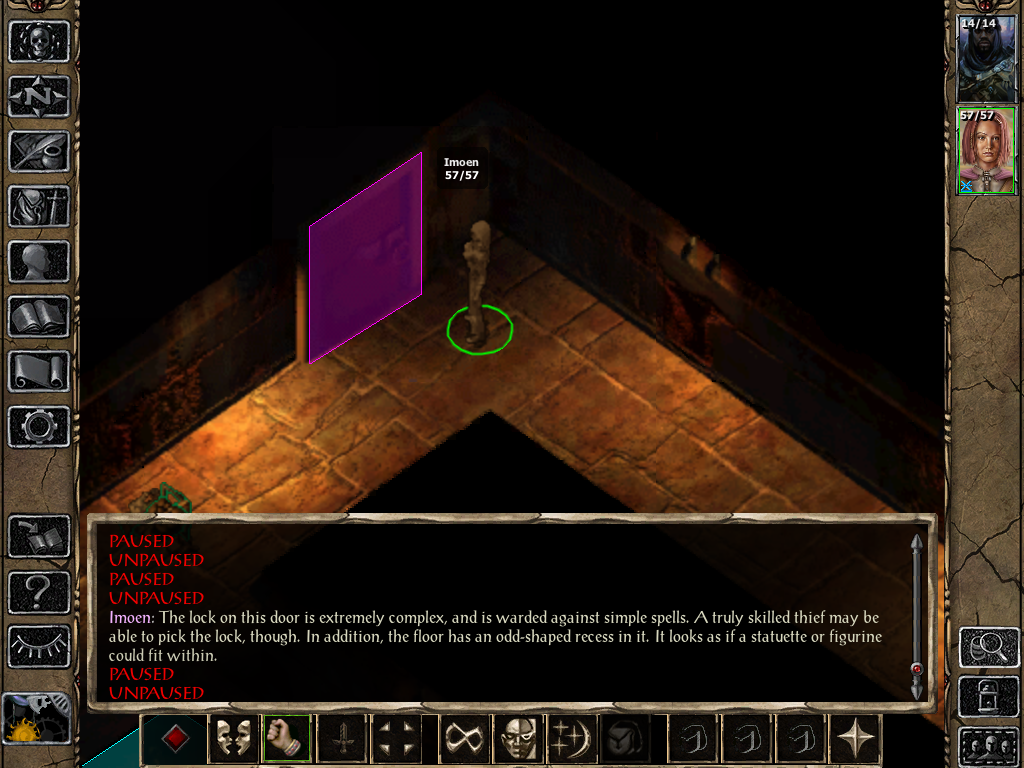 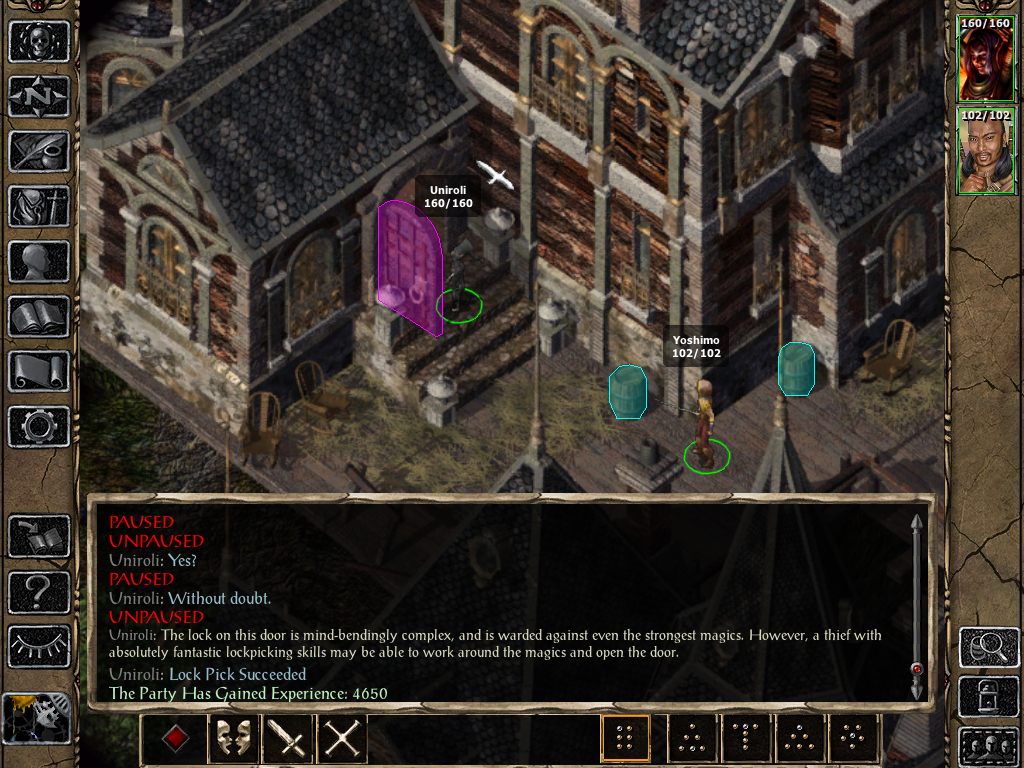 In addition, this component turns a couple of normal locks in the game into epic locks. It does not do this to bar players from obtaining their favorite magic items; it does this only when a lock could be justified in being epic - the only normal lock in Baldur's Gate 1 that this component turns into an epic lock is the lock on the treasury in the Ducal Palace. None of these locks are critical to the plot. I even made a few new unique magic items for some of the newly epic-locked containers! I'll leave it up to you to discover what those magic items are. 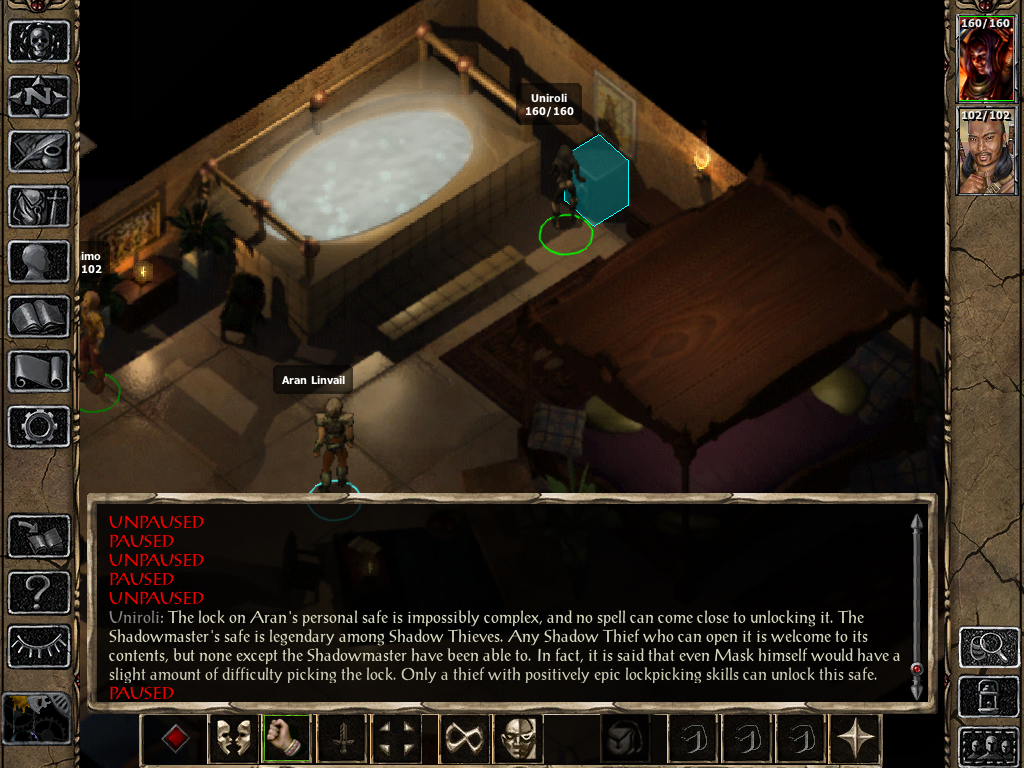 An epic trap, similarly, is a trap that requires a Find Traps skill of over 100 to disarm. The main thing this component does is to turn various non-disarmable triggers in the game into disarmable epic traps. Examples include: 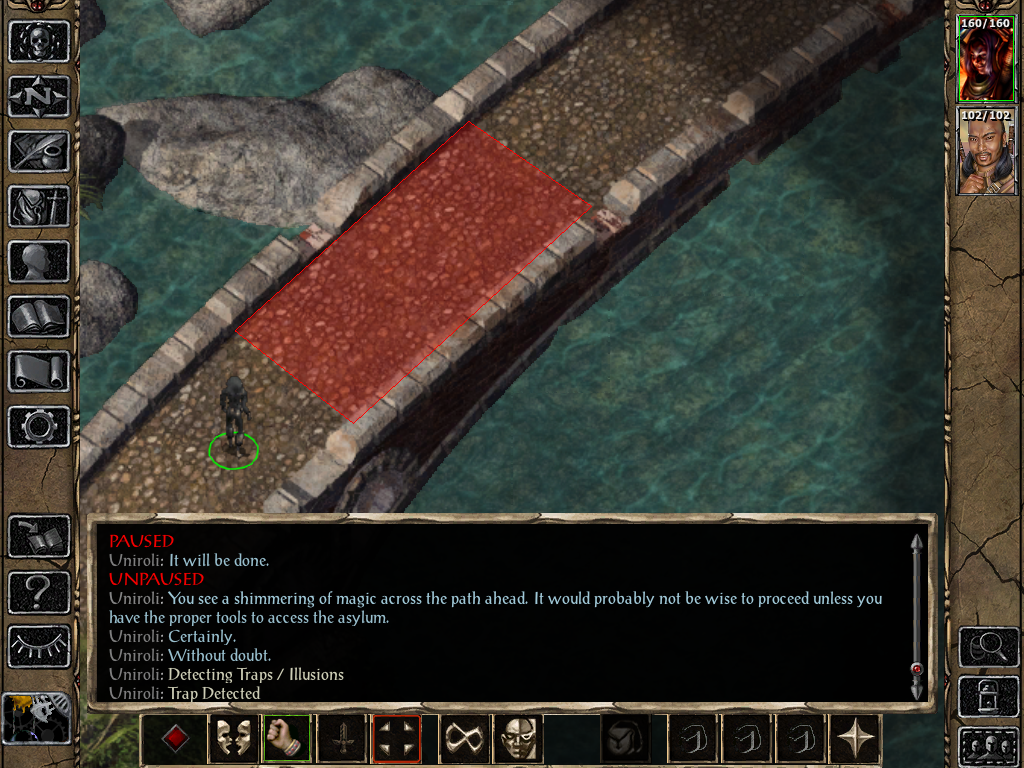 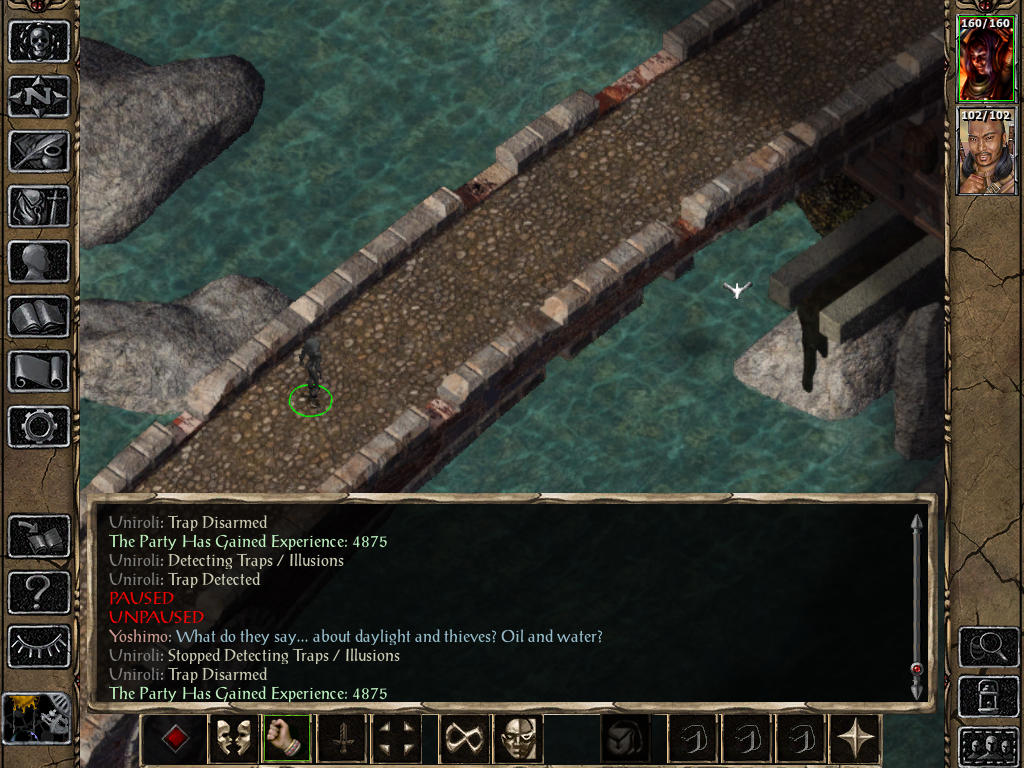 The mod also turns a couple of regular traps into epic traps, mainly in Throne of Bhaal. Some of these traps trigger really cool spells that no one else in the game casts! 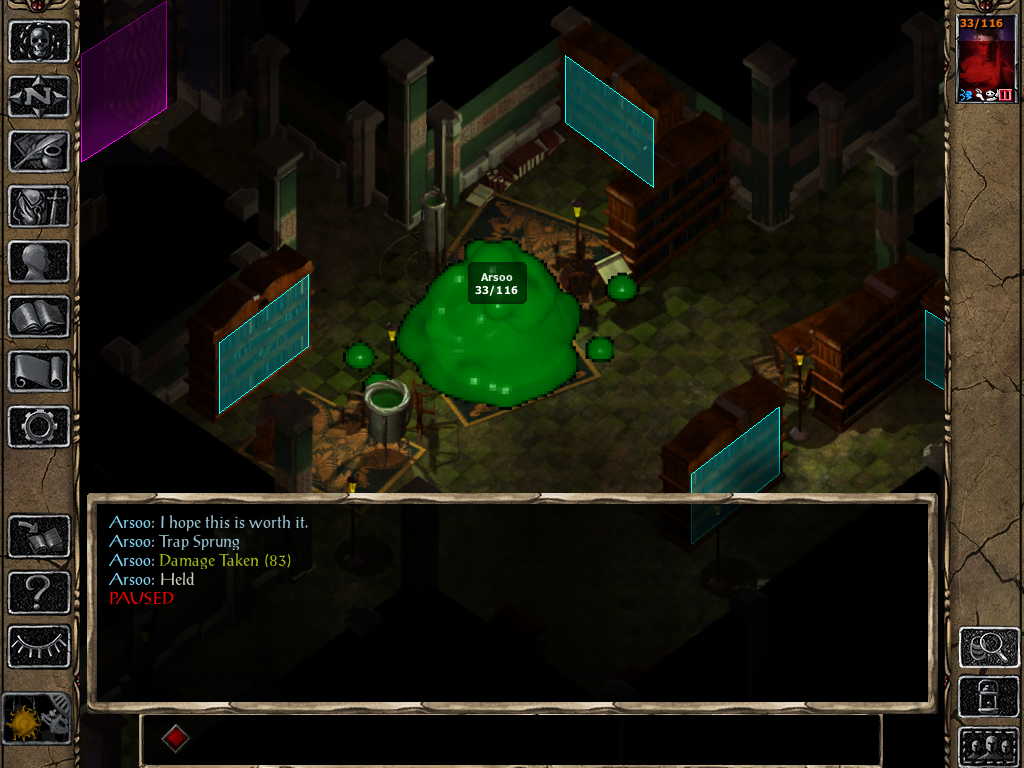 This component overhauls all the trap setting abilities (Set Snare, Set Special Snare, Set Spike Trap, Set Exploding Trap, and Set Time Trap) so that rather than improving based on the thief's level, they improve based on the thief's Set Traps skill. They get more powerful for every 50 Set Traps points the thief has, with the highest threshold being a Set Traps skill of 250 or higher. For characters less skilled at setting traps, the traps will be less powerful than in the base game. However, for characters with extremely high Set Traps skills, the traps will be potentially slightly more powerful than in the base game. In addition, since trap power is no longer based on level, if you have your thief put all of their points into Set Traps at each level up, they could get high-power traps really early (though at the cost of forsaking their other thieving skills). 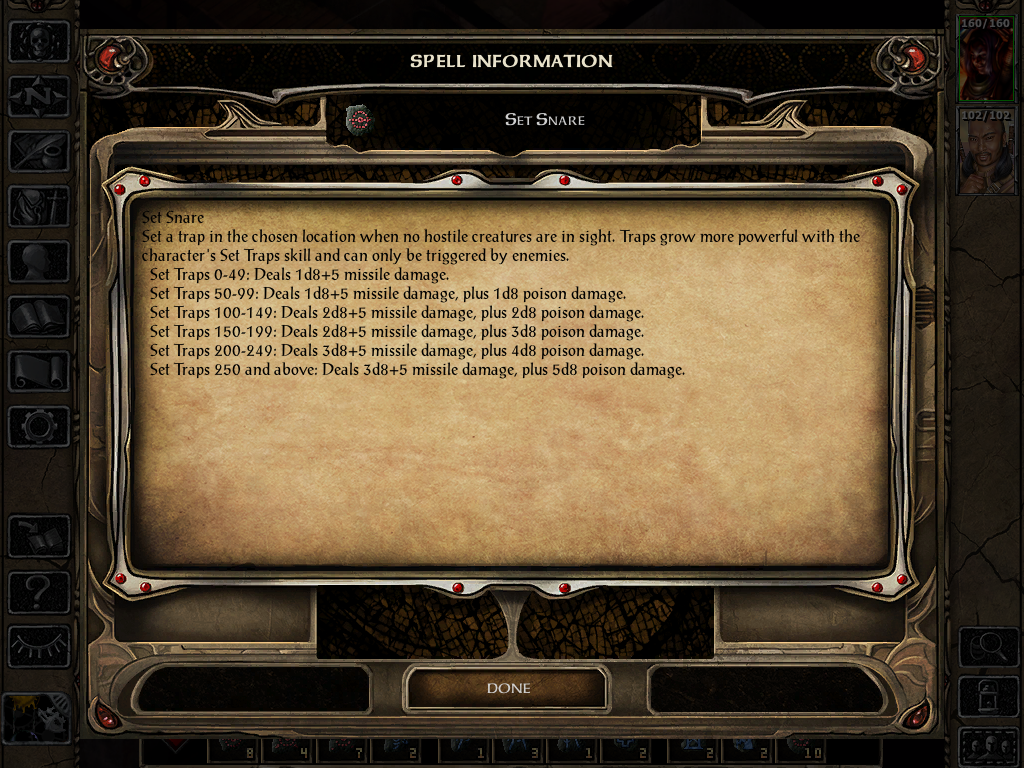 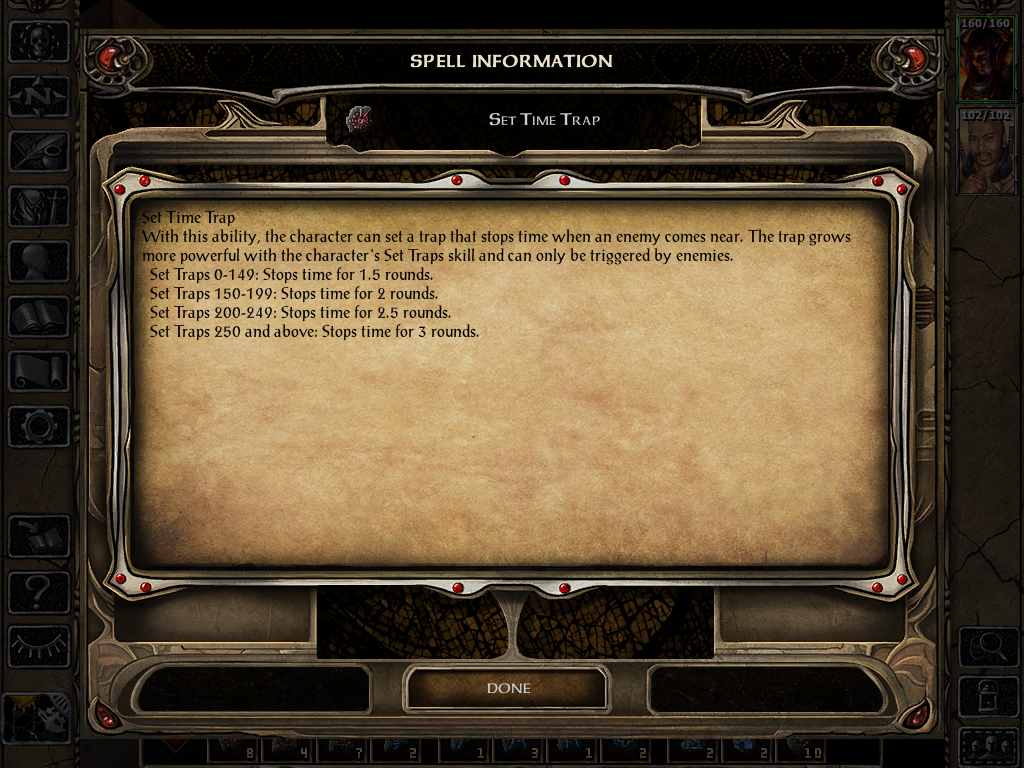 This component does two things. First, it changes the minimum Pick Pockets requirements necessary to steal items that a creature is holding in certain inventory slots. In the base game, it is impossible to steal a creature's helmet, shield, boots, or armor. With this component:

Even with this component, you cannot steal from a hostile creature. There doesn't seem to be anything I can do about that.

The second thing this component does is allow you to steal from a couple of stores you couldn't steal from before. This is far less comprehensive than the changes to locks and traps in the other components. Only a few stores were changed, mainly some of the major, high-profile stores in Baldur's Gate 1 and 2. I'm going to list all of the stores I changed because I don't want you to be afraid when you're about to steal from some random store that I might have made it super-difficult to steal from. 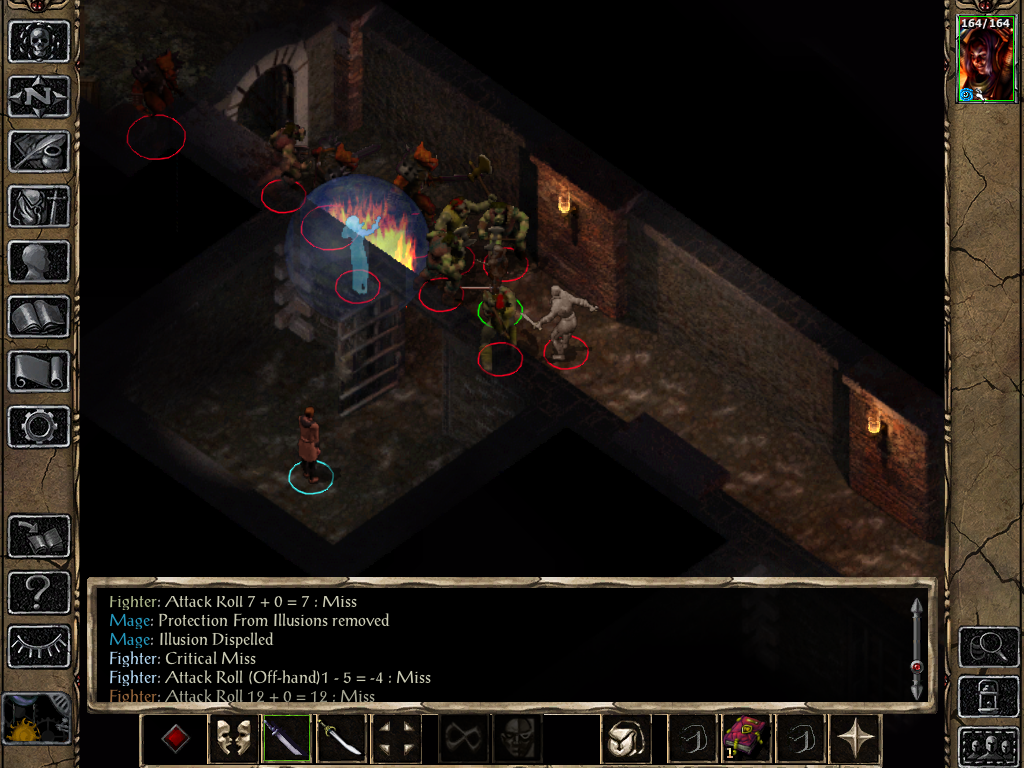 This component also makes it so that characters with a Detect Illusions skill of at least 100 can effectively see invisible creatures and target them with spells or abilities. This also affects shamans, once they reach 100 Detect Illusions.

This component adds a brand new skill to the game: Use Poison! Thieves can put points in this skill like the other skills. Having a high Use Poison skill increases any poison damage dealt by the thief, whether from traps, an assassin's Poison Weapon, or from weapons and missiles that poison the target. Assassins start with +20% to their Use Poison skill. Thieves get +4% to the skill for every point of Intelligence they have over 10. 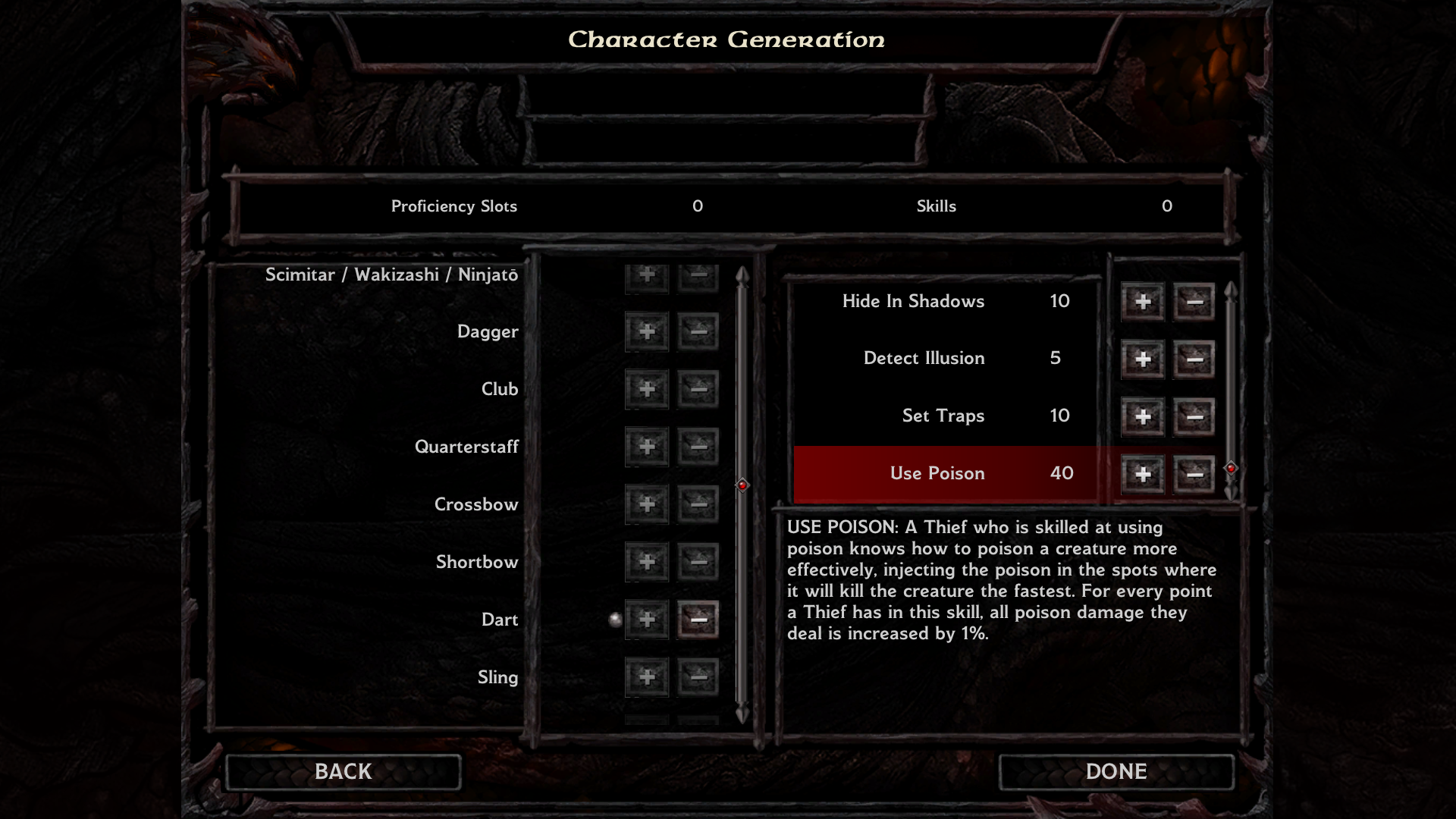 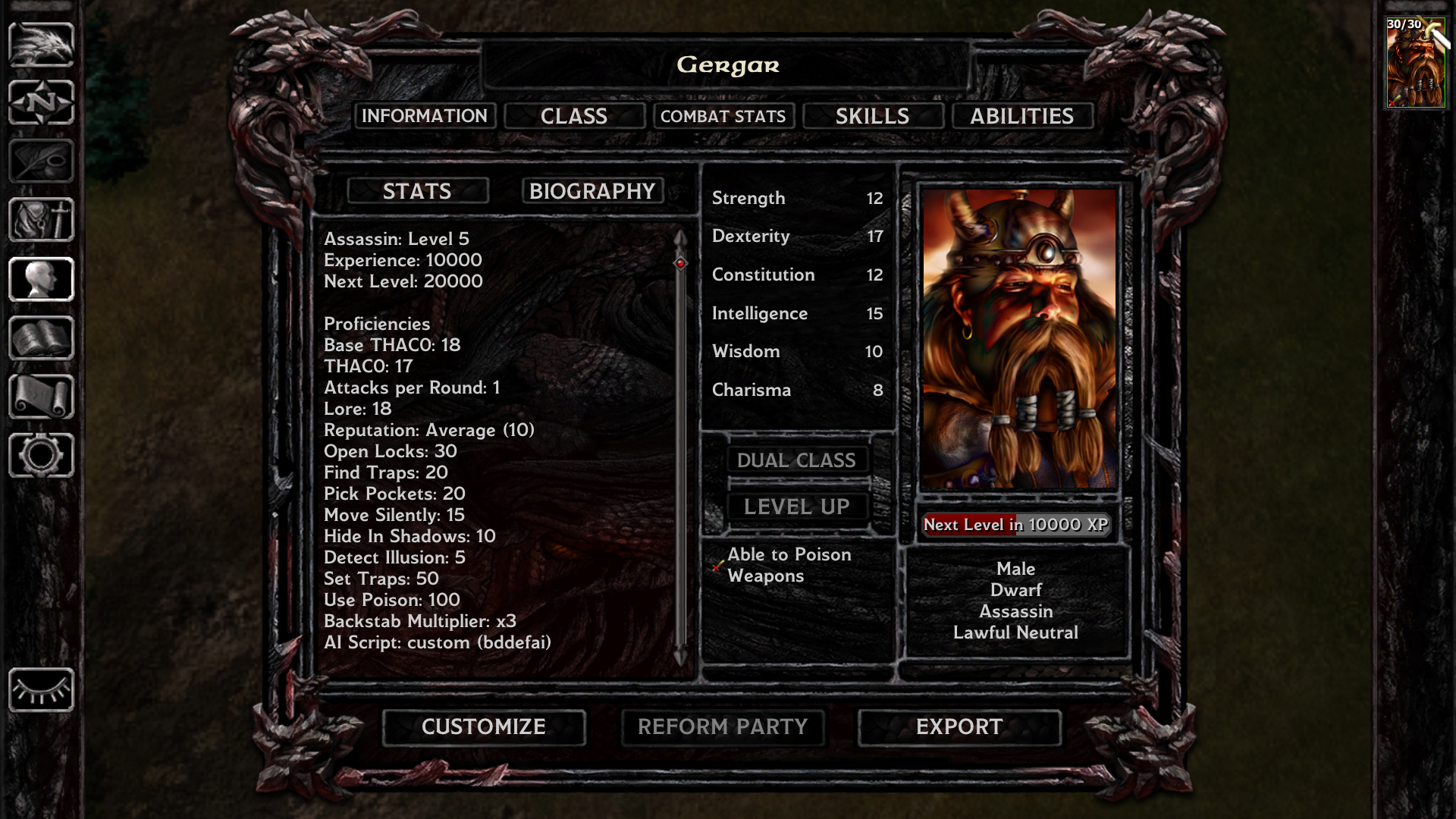 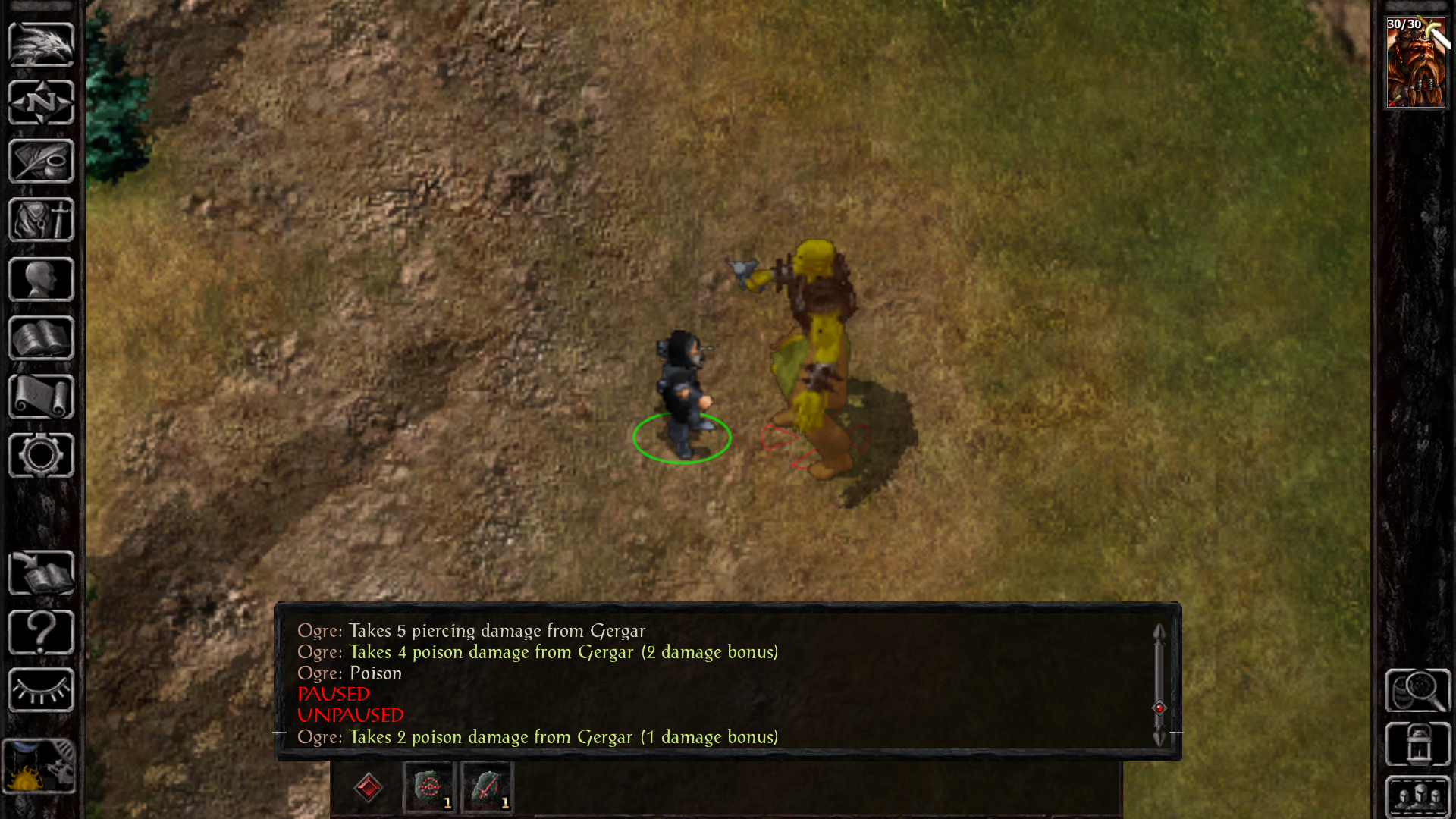 Before installing this component, you must install EEex, which allows the creation of new thieving skills.

Prevent multiple Potions of Perception or Master Thievery from stacking