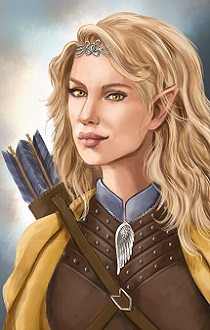 – One new party member using the Ranger Archer Kit
-Can select Arcane Archer or Arcane Archer/Wizard during installation of Arcane Archer from the Artisan's Kitpack
-Can Craft Arrows once per day after her fifth BG1 Talk, and enhance a bow once only.
– 9 friendship talks with the PC in BG1, 6 in SoD
– Banters with every BG:EE and SoD NPC
– A questline in BG1.
– A romance with any elf, half-orc, human, or half-elf male PC in Siege of Dragonspear (No gender restriction in BG2)
– Crossmod content with Sirene, Vienxay, Helga, Kale, and Recorder.
- Optional Music Soundtrack