Pecca Member Posts: 2,045
August 2016 edited August 2016 in UI Discussion and Workshop
I've seen some posts on the forum asking for a general thread to express people's problems with the current state of game's user interface and suggestions about how to make it better. So here it is. Feel free to describe any issue you have with the UI and say what solution you'd like to see.

I'll start with a rather extensive list of things I've gathered so far.

Area map
-Introduce an option to disable zoom animation in order to smoothen the gameplay. Previously it was possible to use the map screen to shift to another location on map in just about a second, now the time is unnecessarily prolongued.

Worldmap
-First out of two times in this post I'll say turn it back as it was pre 2.0. The extra text clutters the screen, traveling became clumsier. There is also no way to know travel times to unnamed areas.
-Plus, when the worldmap area is stretched by modding, it creates a scrollable gap underneath, which of course shouldn't be there.

Journal
-Finished and unfinished quests are very badly unrecognisable from each other, use another color (like black) for the finished quests headings.
-Introduce filters to show only finished or unfinished quests.
-All in all, do everything what Mr2150 did with his journal mod, he pretty much perfected it.
-And more than that, introduce an option to have a center based modal journal, which would act like other screens (and pre v2.0 journal) for those who prefer that rather than one sitting in the corner of the screen.

Inventory
-A large portion of the inventory graphics shifting everytime an item is picked up to show item comparison is very distracting and rather clumsy. Use available space to just change the text, like in this photoshop mockup:

-Introduce an option to turn the yellow portrait hightlight suggestion off for those who find it too distracting (currently it's not possible to disable even by modding).

Spell screens
-Introduce a toggle that would shift between a list of know spells and icon based group of known spells (as in pre v2.0) for players to choose their preference.
-Display memorized spells in order in which they have been memorized, instead of alphabetical order, which makes the spell management more confusing.
-In the list of known spells, introduce a fitting graphics for selected spell instead of the red shade. It looks inappropriate on a "paper" background.
-Reintroduce arrows that shift between spell levels (next to the spell level buttons is an appropriate space).
-There is no need for two similar labels "mage spells" and "mage book" just for the sake of contingency, it looks odd. Replace the "mage book" string with character name, keep the contingency string.
-Memorizing spells from the list is confusing. Either explain clearly in the rightside tooltip, that spell icon, not the text, needs to be pressed or make the spell description display on hovering over the spell and have the text memorize the spell too. Now you can get rid of the memorize button. (this must happen for icon based group of known spells anyway)

Escape menu
-Make the logo change depending on the campaign.

Dialog window
-The second time I'll say revert it back to the pre v2.0 state. If the idea behind the change was to allow the height to be stretched for longer dialog texts, I can only say it is absolutely not worth loosing the ability to conveniently go through the log history with just a scrollbar. That functionality is being gravely missed.
-Introduce an option to turn off spacebar advancing the dialog.

Main menu
-Introduce SoD style main menu into non-SoD games, namely the option to continue the last save, load game, new game and shift between campaigns all from the first screen.

Character Generation
-Change the way custom portraits are selected. There are many ways, just pick one that displays more than one portrait at the time. Currently, having more than a dozen custom portraits makes it a real pain to choose.
-Introduce button graphics to the lists of elements instead of the red shade. It will look better.

Load screen
-(this is not exactly UI related but still) If possible, introduce the option to select a number of quick saves. Also make the chapter saves optional.

Record screen
-In all other cases I have a pretty solid vision of how the UI should look, except this one, so I'll present a possible vision, rather than suggestion.
-First thing though, unite the design (mainly in SoD case, but BG2EE graphic is kinda out of place too). Dragon heads look cool, but either give the edges to all other ingame windows, or none. Otherwise the UI gives a non compact feeling.
-Now, the problem at first sight is that there are too many buttons at too many places (plus "abilities" and "stats" being rather improperly named). Also the space for status effects is way too small. Overall it looks chaotic.
-On this screen, it is especially important to save space and use it modestly and intelligently, since we want to show much information at the same time and in orderly fashion, so it must not confusing for the player.
-So for the vision - two big lists with information contained in collapsible paragraphs based loosely on the old familiar (pre v2.0) design: 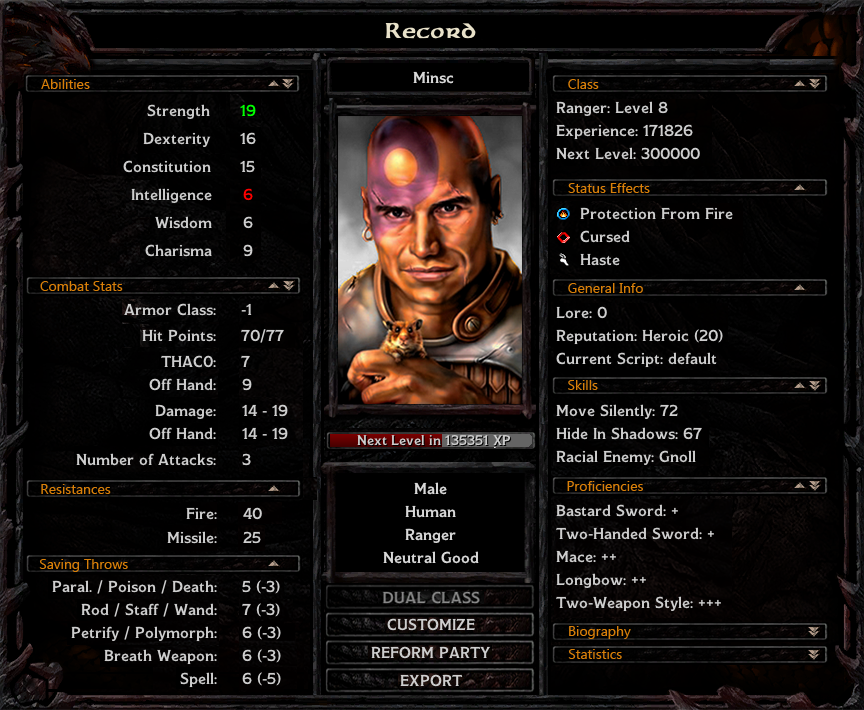 -Those paragraphs can be collapsed to make more space for information below them (kinda like the journal works now). Ideally it should be possible to customize which paragraphs would be collapsed by default.
-Some of these paragraphs would also have a button to show more information (double arrow). That would substitute the tab buttons. Double arrows would also collapse all other paragraphs to make a clear space for the desired information.
Anyway, I don't actually know if it's possible to have many expandable/collapsible paragraphs (and with button graphics) inside one list of items, so this is just an idea. But I would recommend to keep a design familiarity with the old record screens.

So, this is my input about what I think would help to percieve the UI more positively overall.

P.S. All pictures here are only rough photoshop mockups to serve as an inspiration.