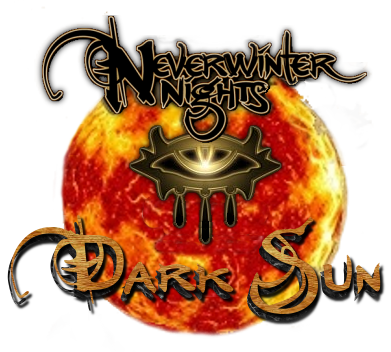 Yes we are still working on Dark Sun for NWN and are looking for more people who are willing to help.

Dizzitt Gardan and I played PnP AD&D 2nd Edition Dark Sun for years in the 90’s and to say that we both really enjoyed playing the campaign setting would be an understatement.

This is just one of the main reasons why two years ago Dizzitt Gardan and I (Tonden Ockay) teamed up to create Dark Sun for NWN. However we didn’t know how to create custom content for NWN1 back then, so we had a lot to learn in order to do this project right. Now two years later, with everything the two of use has learned, we both feel more then confident that we not only can make this project happen, but also do it justice giving it the attention to detail it deserves.

The Project is all about bringing Dark Sun to NWN

If this is something that you would like to see happen please contact us to see how you could help.
Post edited by Tonden on November 2020