[MOD] Shades of the Sword Coast 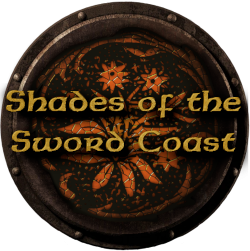 Shades of the Sword Coast
A quest pack for BGEE

The first part of Baldur's Gate presents to us many areas and gives us much freedom. However, the game includes many "holes" that lack interesting characters or content, leaving us with the idea of both excitation and... this feeling that what we saw wasn't enough. Because of that, I've decided that my next quest mod should be for BGEE, rather than IWDEE or BG2EE. I would like to offer Baldur's Gate fans some small- and medium-size quests that are to fill some "gaps".

Shades of the Sword Coast includes new areas, yet not accessed by the Worldmap, but through existing places. Would you like to get an additional small story that's set under the existing Ulcaster School? Or maybe you'd like to discover a new cave not far from Gullykin? Perhaps a new quest that's to involve the Gnoll Stronghold area?

The quests are not as big as the Werewolf Isle quest or Durlag's Tower. They are to add new flavor carefully, making the existing content look richer, rather than overwhelm low-level party with high-fantasy stuff. I tried to make new content vivid, but also appropriate for BG1 and its experience limit cap.

There is a total of 24 small-to-medium quests, some are like "fetch something and bring it here" while others will be "discover what actually happened here". I hope such a mix will make this a nice mod that offers both simple tasks and some more... unusual quests and encounters. I tried to make even the "FedEx quests" a bit more interesting... and there are always some rewards.

You need to start a new game to enjoy most of the new stuff. 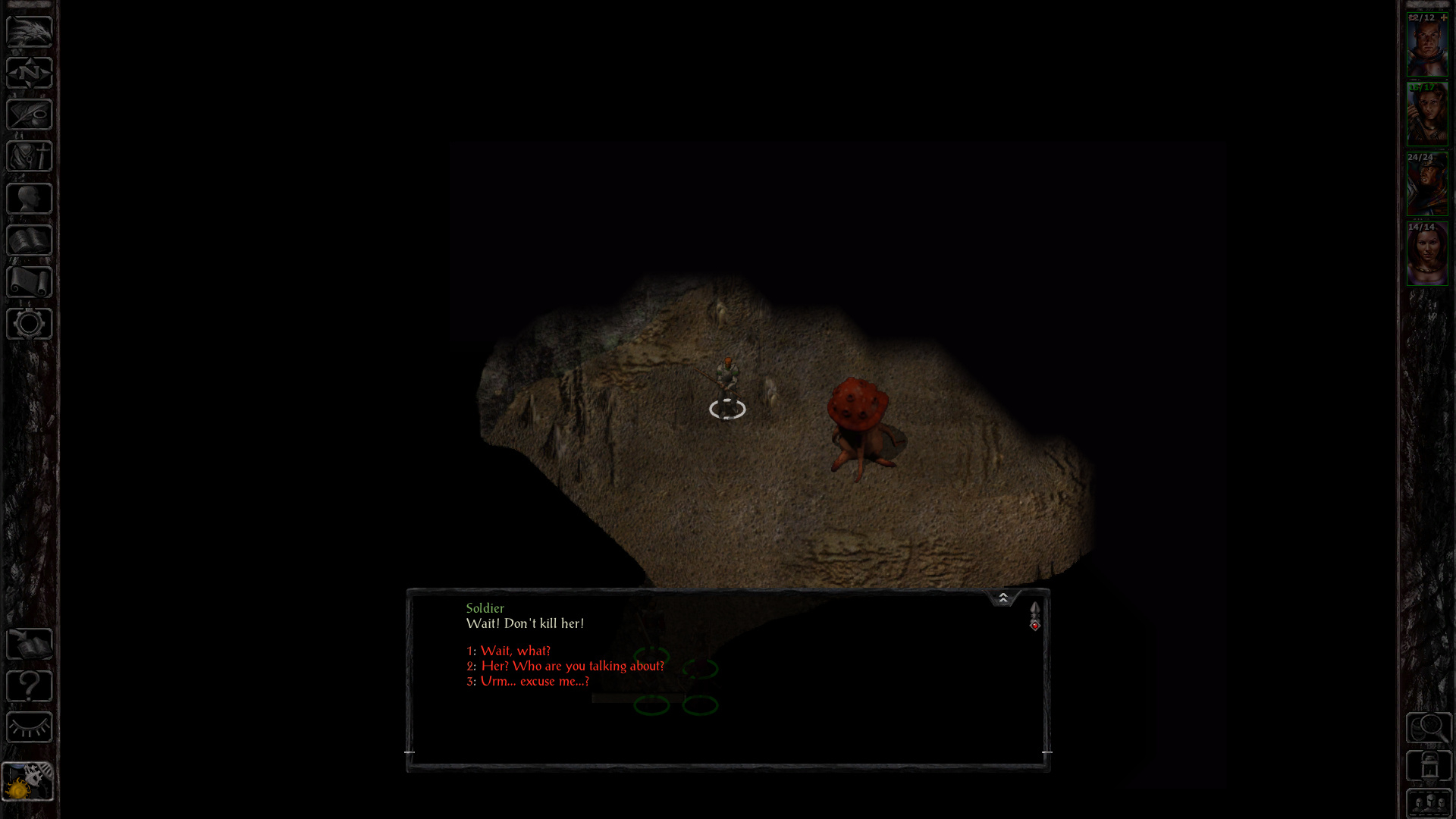 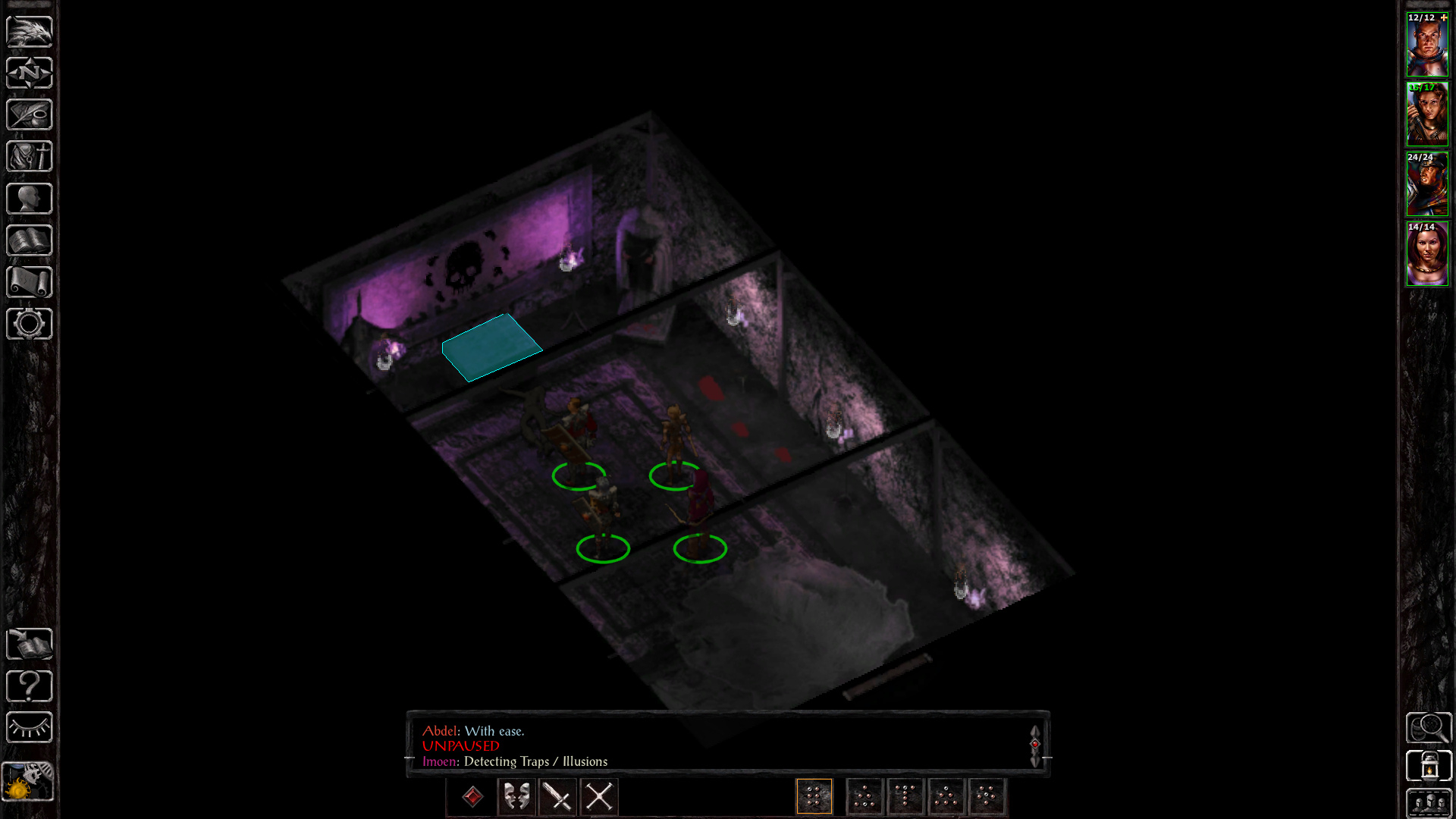 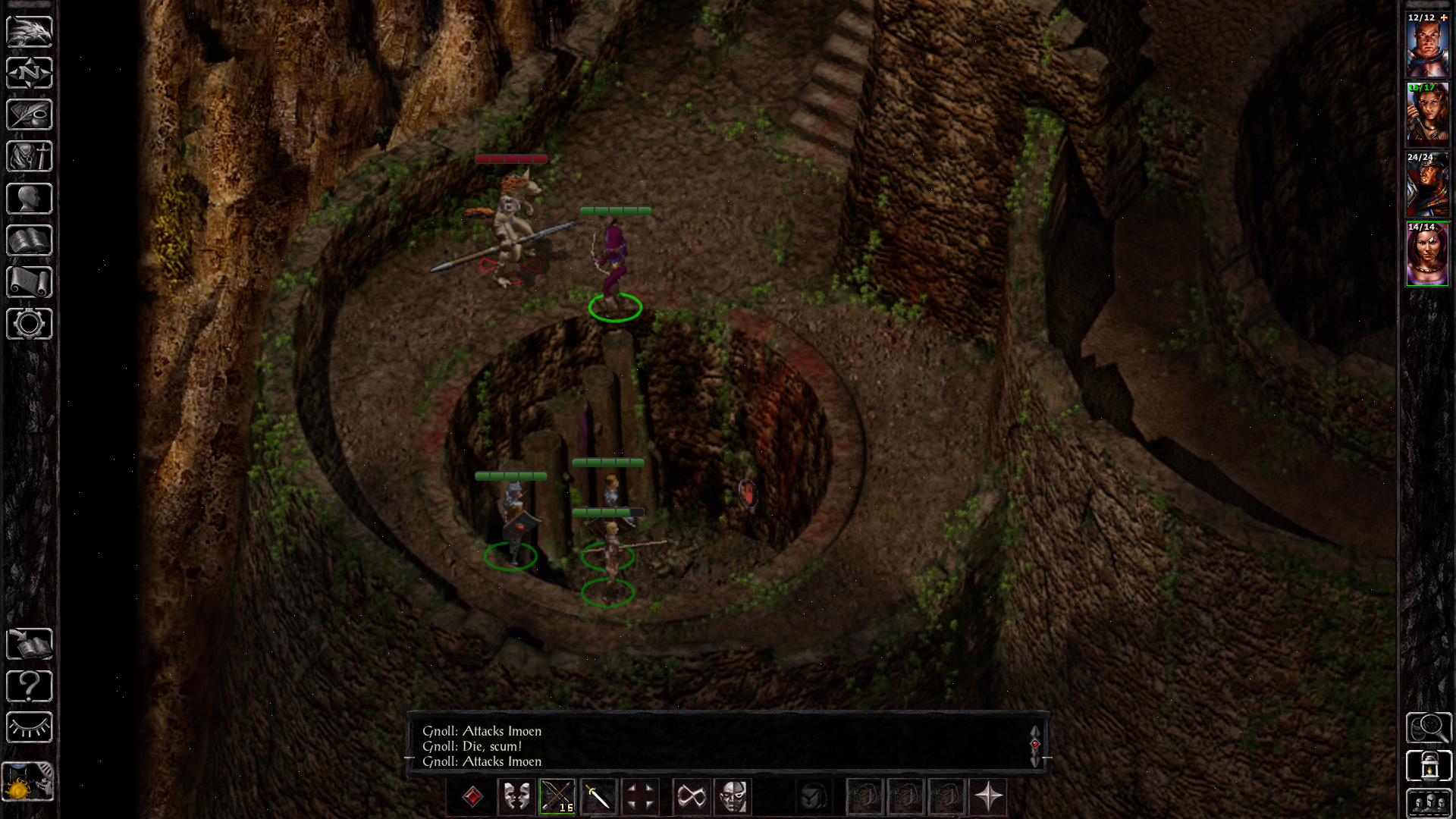 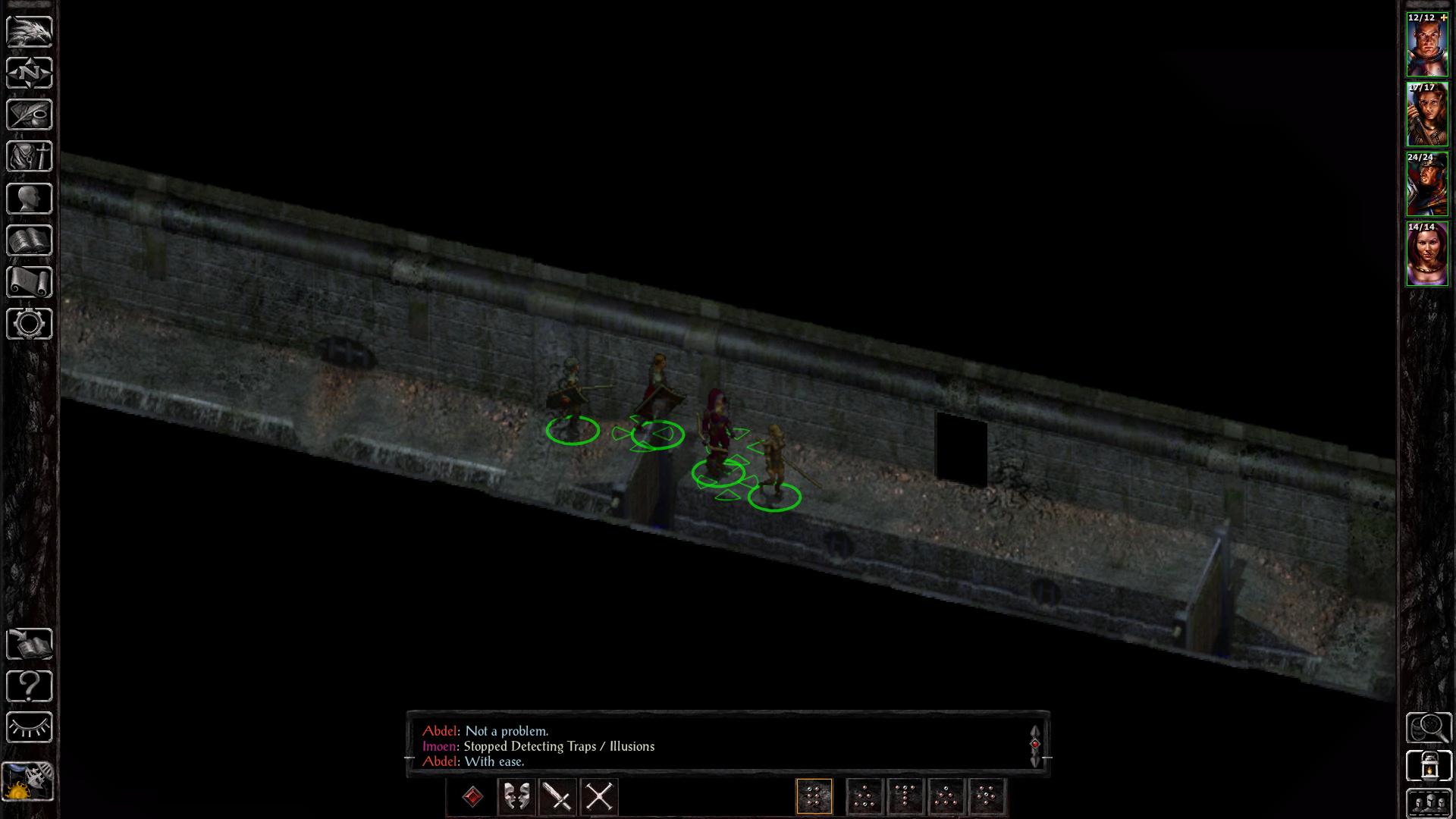 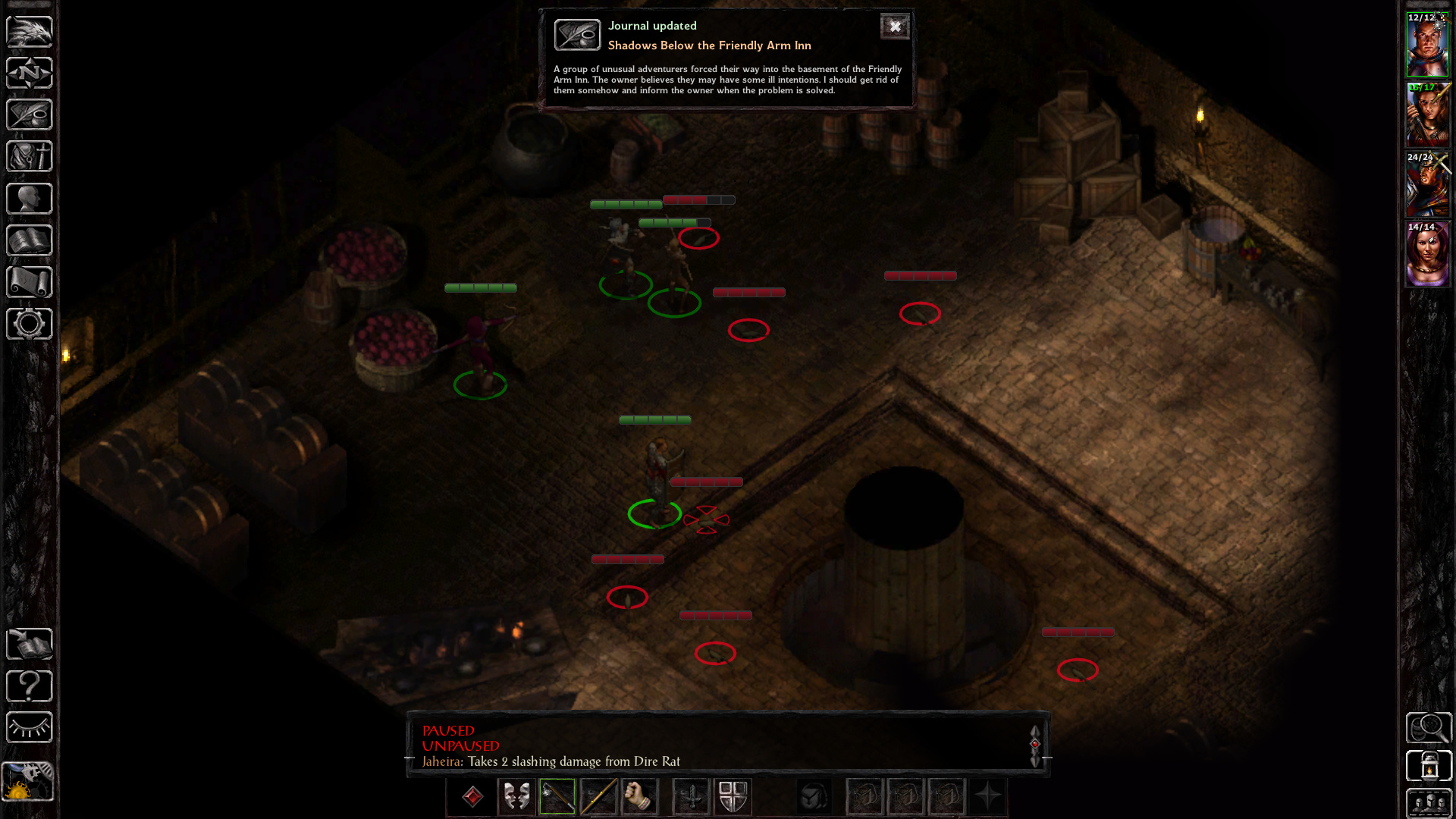 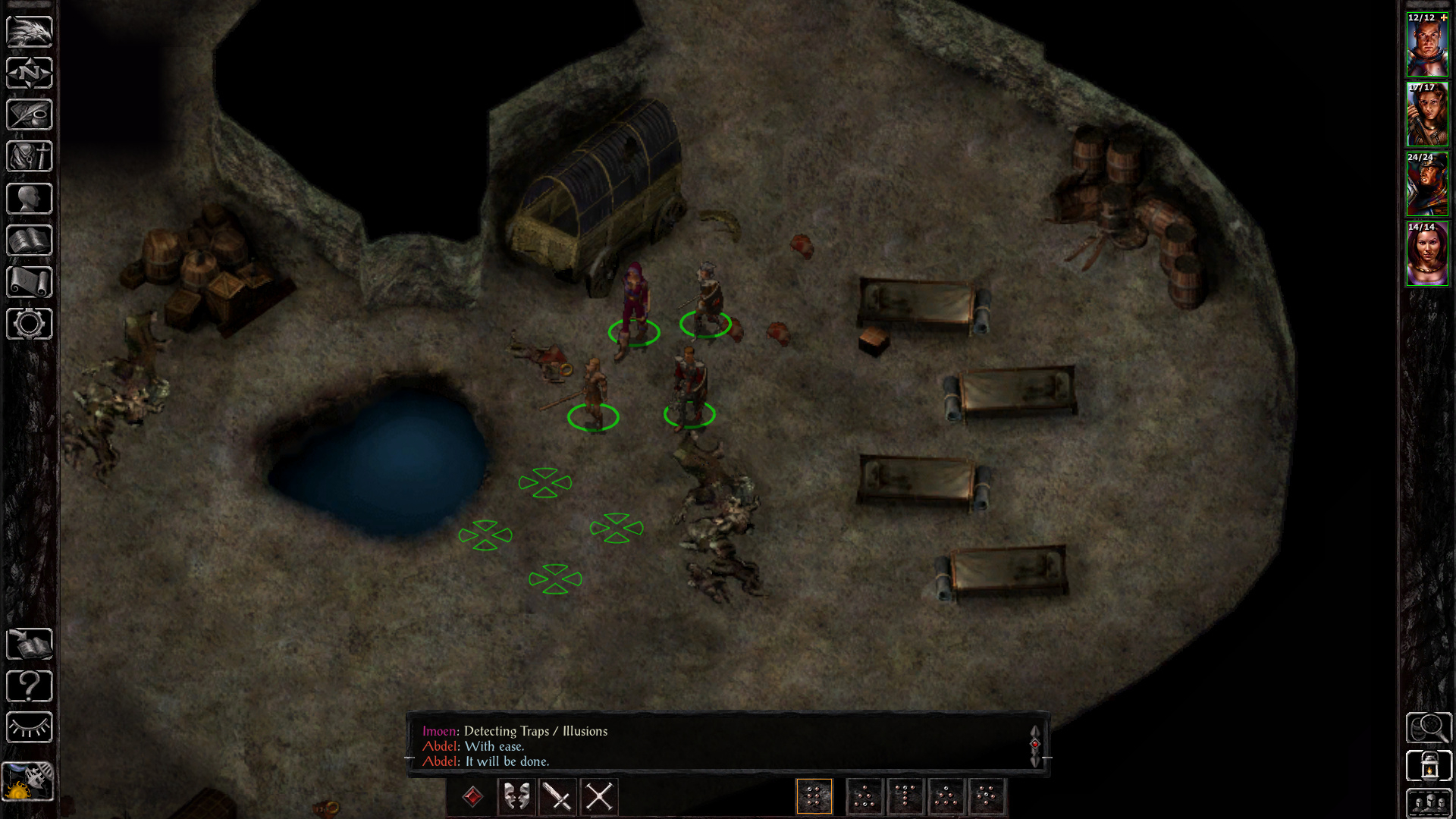 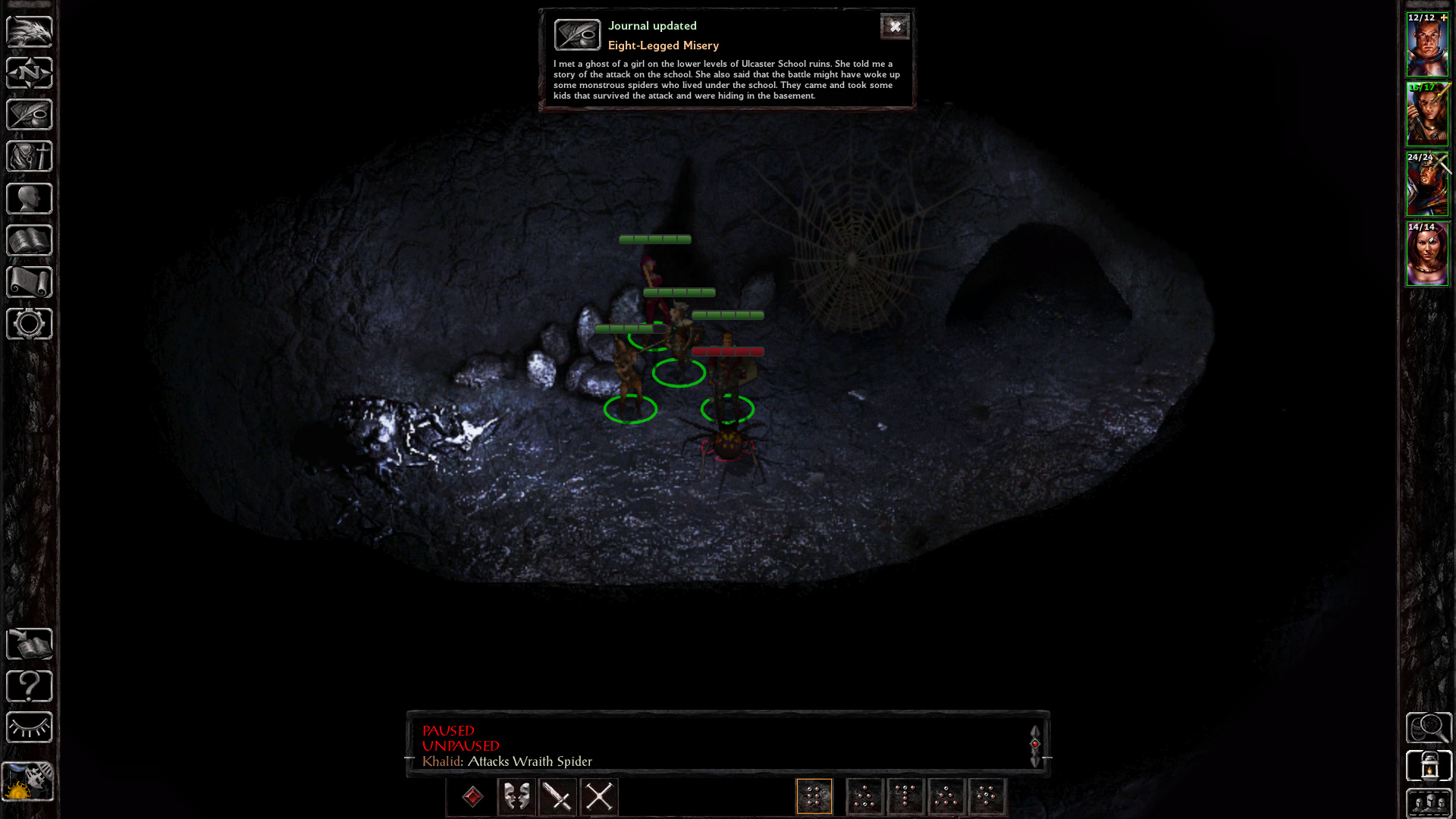 List of quests:
1) Circles of Interest: a new quest that starts at the Friendly Arm Inn. At some point, when leaving the Inn, you will be approached by a scholar that wants to investigate some circles in the Sword Coast that open door to hideouts - unusual places that hold keys to powerful energy that may be of great use.

2) Shadows Below the Friendly Arm Inn: a new quest, which allows you to visit basements of the Friendly Arm Inn. The place may hold something more than rats and barrels. Will you investigate the lower floors and face the past of the hold that today is used as a resting stop for many travelers?

3) The Parted Lovers of Ulgoth's Beard: this new quest sends you on a mission to check the Lighthouse and secret caverns on the edge of Ulgoth's Beard. Are you ready to walk these dark tunnels? Will you help to tame the old desire for revenge?

4) The Bone Collector and the Missing Halfling: there is a certain man Sarevok wants to find... why? Perhaps he has something that caught his attention. Some items that could also serve the protagonist and his/her companions... if they dare to use them at all. The plot of this mini-quest starts with reading a note left on the desk in Anchev's room and with a dwarf standing next to the Blushing Mermaid.

6) Amber Flower: a mission that may be started early in the game, in the town of Beregost. This short quest sends you to the southern part of the map, to find a unique flower that may save the life of a sick and suffering man.

7) Stronghold and its Shadow: the quest that starts in Nashkel, during which you will be sent to Gnoll Stronghold to find a portal through which you will be asked to enter. Will you have the guts to see what's on the other side? Will you retrieve the set of items and return safely to your plane?

8) Kobolds Dream Too: a small quest that starts near the bridge to Baldur's Gate. It is there where you can meet a kobold named Zee. He has a very specific dream. Will you help him to make it come true? Or will you leave him there, waiting forever? Zee may also return in SoD if the DLC is detected upon installation.

9) The Midnight Dog: a quest that starts in Gullykin. An unusual dog visits Michalina. It always comes at midnight. Why? Is he trying to harm her? Or maybe there is something he's trying to tell her? Solve the mystery and understand the meaning behind this unusual happening.

10) Big Appetite in small Gullykin: a small quest you may start upon your visit to Gullykin. You'll meet a merchant there, who has quite an appetite for oriental food. There is a Kozakuran recipe he'd like to try out but lacks few components. He'll ask you to bring them if you find them during your adventures.

11) Fungal Friendship: a small quest-encounter in Cloakwood (spider-infested part of the forest) during which you meet a soldier and his... very unusual friend. Will you help them survive the unfortunate circumstances?

12) Unusual Shards: a quest-encounter triggered by finding four unusual shards, scattered all over the Sword Coast. Will you gather them and see what can they actually do?

13) Disrespected Flowers: a quest that starts right next to the bandit camp, in the ruins of an old building. You may talk to someone who calls herself Gardener and who may ask you for help in getting even with a gnoll that dared to disrespect her flowers. This mini-quest also introduces an alternative purpose for bandit scalps.

14) Skeletal Mother: a mini-quest in the Tombs under Candlekeep. It starts when you encounter a Skeletal Mother that's searching for her long-dead children.

15) Beetles, Dreams and an Old Man: a quest that starts in the very heart of Beregost, where a man tells you a story of his gift and unusual beetles he's seeing. Is he troubled? Or is there something more to his unique story? Will you help him find proof those beetles exist or will you convince him to return to his daughter?

17) Ice and Ore: a mini-quest that starts in Nashkel. You can now meet a man standing next to a bridge, who'd like to start a research. To do so, he needs magic ice. A quest that's to bind one of the TotSC areas and the original areas a bit closer together.

18) Into the Manhood / Into the Womanhood: a new encounter in Nashkel during which you will be asked about what does it mean to be a man or a woman.

19) Snooping Around: you ever wondered where Thalantyr sleeps? Where is his private chamber? Now you can see it with your own eyes... will you take a peek? Taking that risk may unlock another mini-quest that starts by checking Thalantyr's shelves.

20) Carnival and the Missing Brother: a mini-quest that starts at the Nashkel Carnival. You'll encounter a man who's looking for his brother. Will you find out what happened to him?

21) Cult of the Dargon: is it possible that one of the most dangerous sect is somewhere there, on the Sword Coast? And if yes, then who is going to stop them from causing even more trouble? A quest starts once you are approached by a new character, near the Ducal Palace, next to the eastern edge of the location.

22) Apex Predator: a new mini-quest you may get when walking through one of the Cloakwood areas. You will be asked to stop a new animal that was brought there by the Iron Throne and which may become a threat to other animals in the region.

23) The Echoed Cry: a mini-quest that involves Rovo, the Unlikely Hero and Crying Woman near the entrance to the Nashkel mines. There are many stories like this one... each of them is equally bitter.

24) Friend Like No Other: a Siege of Dragonspear-only quest that starts by finding and talking to a man during your travel. Will you help him and his friend before they will be hunted down by members of an organization that used to be a threat to the Frozenfar?

25) Shandraha: a small encounter with a werebadger woman. Will you listen to her and spare her life or will you remain deaf to her cries?

26) Infesting Light: a battle-oriented encounter and a continuation of the original Zombie Infestation quest. Find out who was behind the problems at the unfortunate farm.

27) The Melting Man: a new quest that starts in Nashkel. Talk to a brat near the northern bridge and let him tell you about the unusual Melting Man he saw in one of the caves north of Nashkel. Will you dare to investigate the cave and find the Melting Man himself?

28) Ormyrrs' Peak: a new quest that happens in the new area located west from the Gnoll Stronghold... find the old bones and... talk to them. They're quite bored and could use some company.

30) The Tree of Shades: there are trees that bloom with life... and there are the crooked ones. The deathlike. With old and twisted roots and branches. Which one is the Tree of Shades and how can it affect your adventures? Search for it in the new underground complex near Mutamin's Garden and find out. If you dare, that is.

31) My Very Own Hideout: a place for those, that desire a safe space they can call home. Find the key and use this space however you want.

32) The Ghost Ship: an unusual ghost ship was seen near Baldur's Gate. Start this new quest in Baldur's Gate docks and investigate that ghastly place.

33) The Skeletal Captain and His Sons: an undead captain is looking for the remains of his three sons. Will you help him? This quest can solve you The Ghost Ship quest.

35) The Inactive Golem: a small encounter east from Friendly Arm Inn. It introduces a damaged golem. Will you find the missing part?

36) On-Road Encounters: Have you ever wished there were at least few unique encounters that may happen when traveling between worldmap areas? If yes, then you should be happy to know this mod adds 5 such encounters