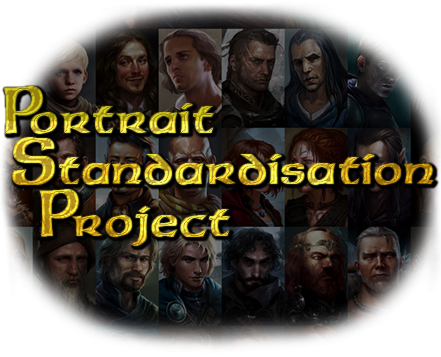 About:
This is the BG1 release of a long running personal project to standardise all the portraits found within Enhanced Edition Baldur's Gate. I personally can't stand the mismatching portrait styles of EE, and considering I already use a custom portrait for my Charname, I found myself slowly replacing every other portrait within the game.

This mod has multiple parts, including replacements for vanilla portraits, certain mod NPC's and almost every portrait from the "Portraits Portraits Everywhere" mod.

Every Portrait in this mod has been altered by myself to better fit with the the BG style. This includes AI upscaling to clean up each image, framing to keep every portrait to a similar standard, colour and saturation alterations, and any other necessary Photoshopping to bring an image closer to what I wanted.

Starting with Artastrophe's portraits, I used mostly her replacements for the NPC companions (apart from 11) as my base standard. Then, I used artwork with similar styles to fill in the remaining gaps Artastrophe didn't cover (certain Mod NPC's, unused portrait, temporary companions, etc).

After that, I replaced every other portrait that's currently available during character creation, including those used by certain in-game NPCs. With some of these replacements I took a few liberties, sometimes I stayed close the original portrait (race, class, so on...) and sometimes I replaced the portrait with something completely different. My goal here was to give Players a nice diverse collection of portraits that could be used by their own Charname Bhaalspawns.

I then further customised each and every portrait to bring them closer to my personal view of each character and to ensure they all matched in style as best they could.

(For the Portrait Pack replacements, the races and classes written are just what I saw each character to be in my head. Players are of course free to use whatever portrait they like with whatever race of class works for them!)

For this part, each portrait was carefully selected and altered to match an NPC's race, class/occupation, colour scheme, apparent age, personality, and role within the story.

Not every named NPC that Portraits Everywhere gives a portrait to has a replacement. Some NPC's I thought too minor to warrant one, and so they were skipped. The general rules I used were "Is the NPC part of the main narrative? Do they approach and initiate dialogue? Do they give a quest, or are an important part of one? Do they have a memorable encounter?" If yes to any of these, I would give the NPC a portrait.

In the end, I'd guess I've covered 90-95% of PPE's portraits. But if anyone feels I've missed an NPC who really should have one, please let me know! And I shall give it consideration.

Speaking of Portraits Everywhere, I released a smaller collection of replacement portraits some years ago that seem to have been integrated into the mod. These current replacements I -DO NOT- give permission to be used in PPE, at least not without some prior discussion. If the creator or current steward of PPE wishes to use my replacements, please contact me. I would be delighted to have PSP integrated into PPE, but with just a few minor caveats

To install, simply extract the following files into the games Override folder.
This version will work with BG:EE, BG SoD, and I assume the original game as well (although this has not been tested)

And for anyone who wants just my replacements for PPE, without any of the portraits I've yet to replace, here's all the character files. WARNING Put these files into the override BEFORE installing any other mods, otherwise these files will overwrite previous changes. (This isn't an elegant solution, but it'll do for now)

I've spent many many long hours scouring the internet for suitable images to use for PSP. Whilst I consider what I've done to be "transformative" in nature, all credit for the included artwork should be directed towards the artist of each piece.

If anyone wishes to know the sources of any particular image, please feel free to enquire and I shall do everything I can to point you in the right direction.

And, special thanks to my friend, Cynical! A very talented artist who offered her help for this project.

For those who may ask, there will be a PSP for BG2 when I get around to it. But there will not be one for SoD outside of the companion portraits that are already done.

In time I intend to release a rewrite/rework mod for the entire game of SoD, and will create portraits for the NPC's within the rewrite, but not for vanilla. Sorry!

----
After negative response I've removed the links to this mod.
PSP will not be available for pubic release for some time as I have other work that requires my attention.
I apologise for the inconvenience.
Post edited by Sirick on September 15
0