Tenya:- No! Bring her back! I want to kill her again!

I took a little break from working on my Aerie mod for BG2, to try something a little more fun. This is a mod that makes 12 year old Umberlant Tenya a joinable NPC, after you help her of course. Yes, if you like character like Arya Stark or Hit-Girl, but feel they don't talk about carnivorous sea snails or sing shanties enough, now you can become guardian of your own darling little tempestuous ball of fury.

Tenya has a low strength for a cleric, but makes up for it with some special abilities and unique items. She can cast Storm Shield once per day like a cleric of Talos. She also of course has the Bowl of Water Elemental Control... but her mother never even told her how to make it work, so she has to learn elsewhere.

She has at least one interaction with every Bioware and Beamdog NPC as well as several comments along your main quest and a few interjections elsewhere, (in particular around the temple of Umberlee, of course).

Otherwise, what is there is to say? Tenya is a twelve year old priestess wielding a lot of power for someone so young. Her earth-mother never treated her well, but a child's love for her mother is unconditional. After her mother's murder she, consumed by anger, turn to Umberlee. She wished for vengeange, but it was the bowl her mother had entrusted her to protect Tenya most wanted back. She had hoped she would be able to scare the fishermen who stole the artifact into returning it, but they were proving more stubborn than she had anticpated and she was starting to consider more desperate measures, when of course, you step in.

In addition to banters, small quest, and interjections, Tenya now has a small number of Player Initiated Dialogues... press on the speech button and then on Tenya while she's in the party to have a little chat.

Here is a big portrait. The actual in-game portrait has been redone a little by @Asthner, adding a bit more tecture to her scarf. 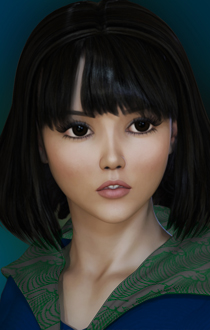 Alignment: Chaotic Neutral ( I changed her alignment to CN, for several reasons. First, I don't really go along with the idea in a lot of other media that the field of child psychology is really just a diversion from the truth that all children are possessed by the spirits of evil aliens. Second, I feel it better reflects her personality anyway - she is quick to anger, abrasive, and like children do will sometimes try to test the limits of people around her to see how much she can get away with. But, she can actually be quite helpful and even nice, on occasion. Lastly I just wanted to leave it open so that maybe in some future expansion she can develop either way due to your influence.

Her stats are not magnificent, but she has a fair bit of stuff. Like a ring that gives an extra cleric spell each level and also functions as a ring of protection +2.

She has a bunch of mephit spells she can cast (steam and ice shards etc... basically all the ones that have any sort of connection to water. She's a waterbender). Not really very powerful, but can be useful on occassion.

She can also cast Storm Shield once per day like a Cleric of Talos.

At the end of her 'quest', she'll be able to use the bowl. It allows her to summon a Water Elemental once per day, which gets stronger as she levels up (Lesser, norm, Greater). It improves every five levels, so since she caps at level 9 I think in BG1, you won't get the first upgrade without removing the XP cap first. Since I couldn't find any water elemental creature in BG1, I had to make up my own, just taking the fire elementals and swapping around damage/resistances to fire and ice.
Post edited by Coutelier on April 2018