[Mod] Imoen 4 Ever - Experience the BG Saga with Imoen - and the beginning of SoA without pressure!

This mod aims at making Imoen a steady companion throughout the whole BG-Saga. Imoen-related story content is being considered, therefore Imoen will be out of party temporarily to reflect the most crucial original game events. This mod makes her rejoin the party after such incidents, so that she can be seen as an actual travel companion in SoD and BGII.

The mod tries to use as many originally voiced lines as possible, but some had to be taken out because they didn't make any sense without Imoen being there (BGII) or with Imoen catually being in the party (SoD).

The mod is compatible with SoD and all BGII games: BGII, BGT, BGII:EE, EET. For EET, install the mod dirctly into your EET game folder. For order of install, this mod is to be considered to be a questmod, i.e. should be installd before any NPC or other mods that add interjections into chapters 2&3 in BGII.

Content BGII:
This mod gives back Imoen in Chapter 2 and 3, right after the first dialogue with Gaelan. The player can then explore and play all quests without any time pressure or moral dilemma about a friend needing rescue. The original game content kicks in again after the arrival in Brynnlaw: Imoen will now be kidnapped. If the optional component is installed, Yoshimo will be then available for recruitment in the Brynnlaw tavern.

All(most all) lines referring to Imoen being taken and needing rescue where replaced with references to Irenicus, instead.

Content SoD:
With this mod, Imoen will be recruitable in SoD. There are several optional components. For one of them, Imoen will remain in your group in the beginning of SoD if she was in BG:EE (If Imoen was not in party in the transition from BG:EE, her presence in Korlasz' Crypt will play like in the original game with no changes.). She will be a party member in Korlasz's crypt up until the point where all party members leave and the PC finds themselves in the Ducal Palace. From there, Imoen will take her role as in the original game.

Another component lets Imoen return to the group when the group arrives at the first camp after marching out against the crusade. She will then be available as a party member until the original game events after the PC's fall kick in.

More content for SoD offered is reactions to game events and dialogues for Imoen, the original "Imoen studies with Jannath" scene from the scrying pool as a cutscene, the possibility to toggle between Imoen's BG1 and SoD Portrait, and an altered dialogue after the poison attack to give a better reason why she will stay behind.

Please refer to the readme to see which other components are available. 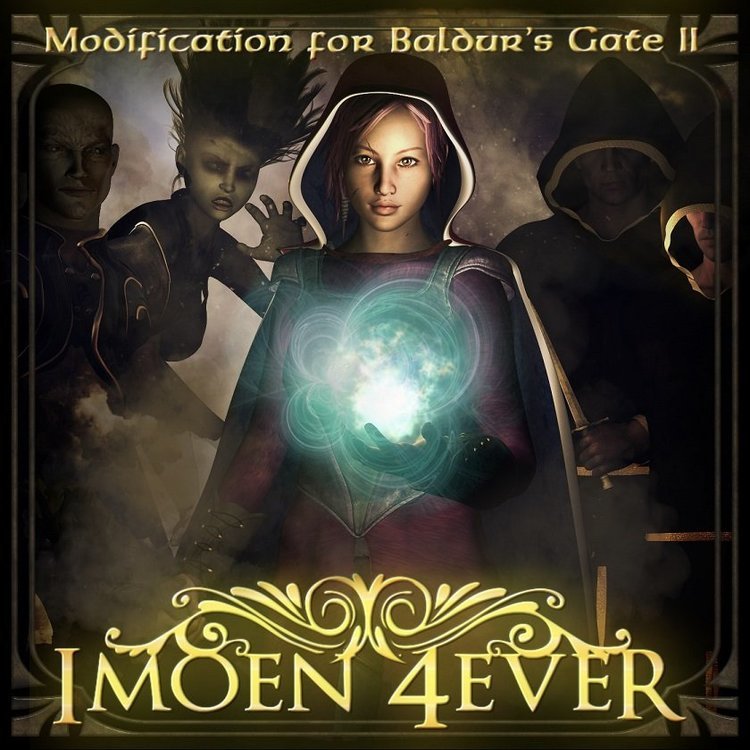