Dee Member Posts: 10,447
March 2016 edited March 2016 in The Road to v2.0
If you've participated in previous "Road to..." events on this site before, you may recall that historically we set milestones and goals for things we want our volunteers to focus on. You may have noticed that there is no counter ticking up this time around for sending us your saved games or filling out a survey that's buried in checkboxes. That's because, this time around, we're doing things a little differently. 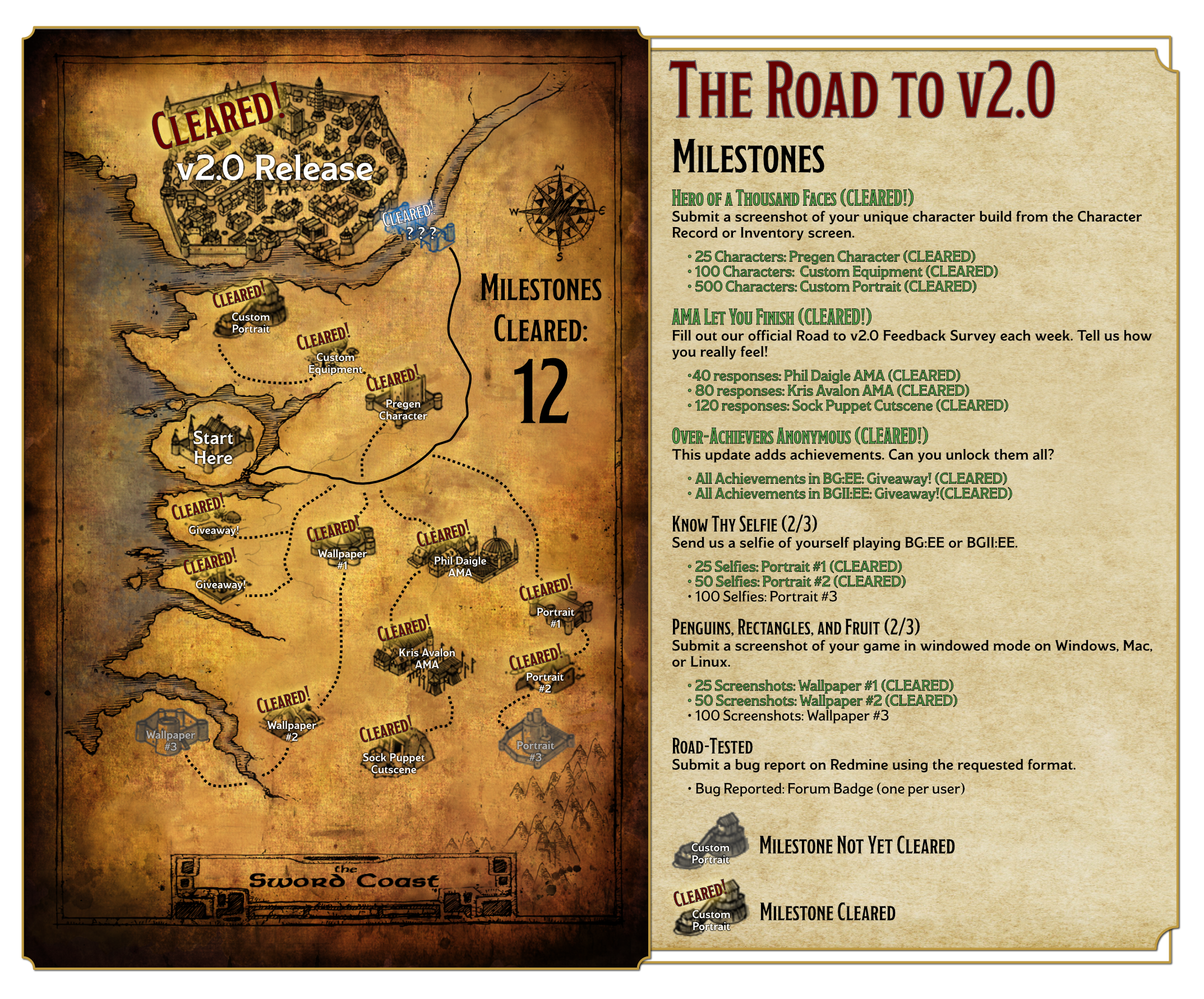 Now, in all honesty, not all of those locations are in the right spot. This isn't a map of the Sword Coast, even though that's what it looks like. It's actually a map to this update's release.

As we make our way closer and closer to the release of the update (our progress along the road will be determined by the feedback from the community, responses to the surveys, and the bugs that get reported through Redmine), we'll keep this map updated to show you an up-to-date summary of our journey together.

But what's that list on the right there? Milestones?

Yes! This time we're doing things a little differently, as I said before. Each time a milestone is cleared, we'll update it on the map and announce it to the world. Each milestone also comes with a special treat for the community (except for our giveaways, which are given to a few specific members of the community). For more details, read on!

Hero of a Thousand Faces - CLEARED!

We want to know who your character is that you've created for the public beta. It could be a character you always play, or something new you're trying because of course you want to play the Shaman, don't you? Post a screenshot of your unique character on either the Inventory Screen, the Character Record screen, or the main gameplay screen. If you like, you can also post your customized Biography for your character. If we like your submissions, we may feature some of them in a future issue of The Familiar! (We'll ask you for permission first, of course.)

We'll create a special character that you can download and import into a new game--either as your main protagonist, or as a secondary character using the Advanced Character Creation feature that's been introduced with this update. At this level, however, the new character comes with no equipment. You'll need to buy that separately.

We'll outfit your new companion or protagonist with a set of custom-fitted gear that's guaranteed to make the other adventurers jealous. (Note: all of this equipment will use existing in-game items to avoid compatibility issues with mods you may have installed.)

What good's a hero without a face? At the top tier, we'll have one of our artists create a brand-new portrait just for the new character.

It couldn't be easier. Fill out a survey. Right? Just tell us what you think of the beta in its current state in comparison to previous betas or in comparison to the version of the game that's currently out in the wild.

Our lead designer, Phillip Daigle, will host a live stream where he'll answer a number of questions from the community. His answers might not be truthful, and he might make fun of you, but we'll put him in front of the camera and force him to talk for at least an hour.

Famed game writer and legend among legends, Kris Avalon (a sock puppet who is in no way related to any human game writers or legends among legends whose names might sound similar) will join Phil in his live-streamed AMA. Kris will talk about his life in this industry, how difficult it's been to break into a field that sees so few sock puppets, and also what it was like to work on that other CRPG everyone's always talking about.

Our art team apparently really likes making sock puppets. So much so, in fact, that they've created sock puppets for all of the characters in the first cutscene of the game where Gorion meets the Armored Figure. Phil will use these sock puppets to reenact that cutscene during his livestream AMA, doing all the voices just like they appear in the game!*

*Phil is not a trained voice actor. Why do you want him to do this?

To recap: We're giving away two copies of the Collector's Edition. To be eligible, you must unlock all of the achievements in BG:EE or BGII:EE, and then show us a screenshot of your achievements list on Steam so that we can verify your claim. Winners for each prize will be randomly selected from eligible participants from either game--only one participant from BG:EE and one from BGII:EE will be given this amazing prize. So go out there and start unlocking things!

If you have a camera or a phone with a camera, we want to see you playing the beta. Take a selfie (or have a friend snap a photo of you) while you're playing the beta, or somehow showcasing the beta in the same picture. Post enough selfies, and one of our artists will select the best shot from your submissions to "baldurize" into a custom portrait that we'll make available to download on this site.

(By submitting your selfie, you agree that Beamdog may use your submission to create a custom portrait. Before we commit to Baldurizing the chosen selections, we'll contact you with a model release form.)

Screenshots are wonderful. But screenshots that show us definitively what operating system you're playing on are even better. Take a screenshot of your game running the public beta in windowed mode and post it! Show your pride in Mac OSX, Windows, or Linux!

At 25 (CLEARED!), 50 (CLEARED!), and 100 screenshots, one of our artists will hand-craft a Road to v2.0-branded wallpaper using some of our premium artwork. There's a potential for three unique wallpapers here, so start sharing your screens!

Anyone who submits a Bug ticket through our Redmine site will get the coveted "Road-Tested" forum badge. (In order to qualify for the badge, you must submit a ticket that follows our requested format in the "How to Report Bugs" thread.)
Roadmap_3-30.png 6.3M
Roadmap_3-31.png 6.4M
Post edited by Dee on March 2016