LavaDelVortel Member Posts: 1,851
April 2013 edited March 2020 in BG:EE Mods
Hey ho!
Just letting you all know that I have just released a new NPC mod! You can get it here:
https://downloads.weaselmods.net/download/white-npc/

And here some basic info about the mod:


"The mod introduces a new joinable character - White, who is also known as White-as-Bones. White is a chaotic neutral human male barbarian, available almost from the very beginning of the game. He is always a 2nd-Level character, so it's advised to recruit him early in game.
White has never been a member of any clan or tribe, he's not that kind of barbarian. Consider him someone who can make use of his rage as if it were a tool. He's also a good hunter, but may get quite furious if someone tries to take his belonging.
The mod includes banters between White and all BioWare NPCs, as well as with BGEE characters - Neera, Rasaad and Dorn. All players may experience some friend talks. What's more, White may start to romance male characters of any race (if the male PC has at least 11 charisma and at least 12 strength.). If you're not interested, just tell him.
The mod includes some PIDs.
You can recruit White near the entrance to the Ulcaster ruins." 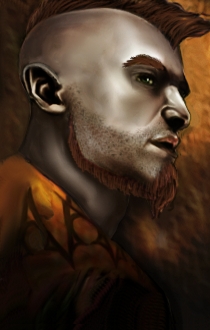