I am writing this letter on behalf of hundreds of your players, based on months of researching and analysis.
We enjoyed Baldur’s Gate: Siege of Dragonspear so much that it became one of our favorite games. We feel like this game can also enhance the Baldur’s Gate adventure and experience, and means so much to all of us.

We’re deeply sad that there’re no plans to include quests and NPCs, related to Siege of Dragonspear, into Baldur’s Gate II:Enhanced Edition. [1] Not only it’s sad because new BG storylines and new Infinity Engine characters, locations and items could be exciting to play, but because stories from Siege of Dragonspear are not finished.

Caelar Argent is left in Avernus, but she’s alive. The way she as a character was built, and the fact she can join your party at the end of SoD means she was supposed to be a returning character in Baldur’s Gate II:Enhanced Edition. We all know that in Shadows of Amn, and especially Throne of Bhaal, the main character becomes so powerful that she could return to Avernus and save Caelar Argent. her Story is obviously not finished yet and a plenty of BG gamers are still using hashtag #bringBackCaelar, made by Dev6, across the Web. It became a real battlecry. 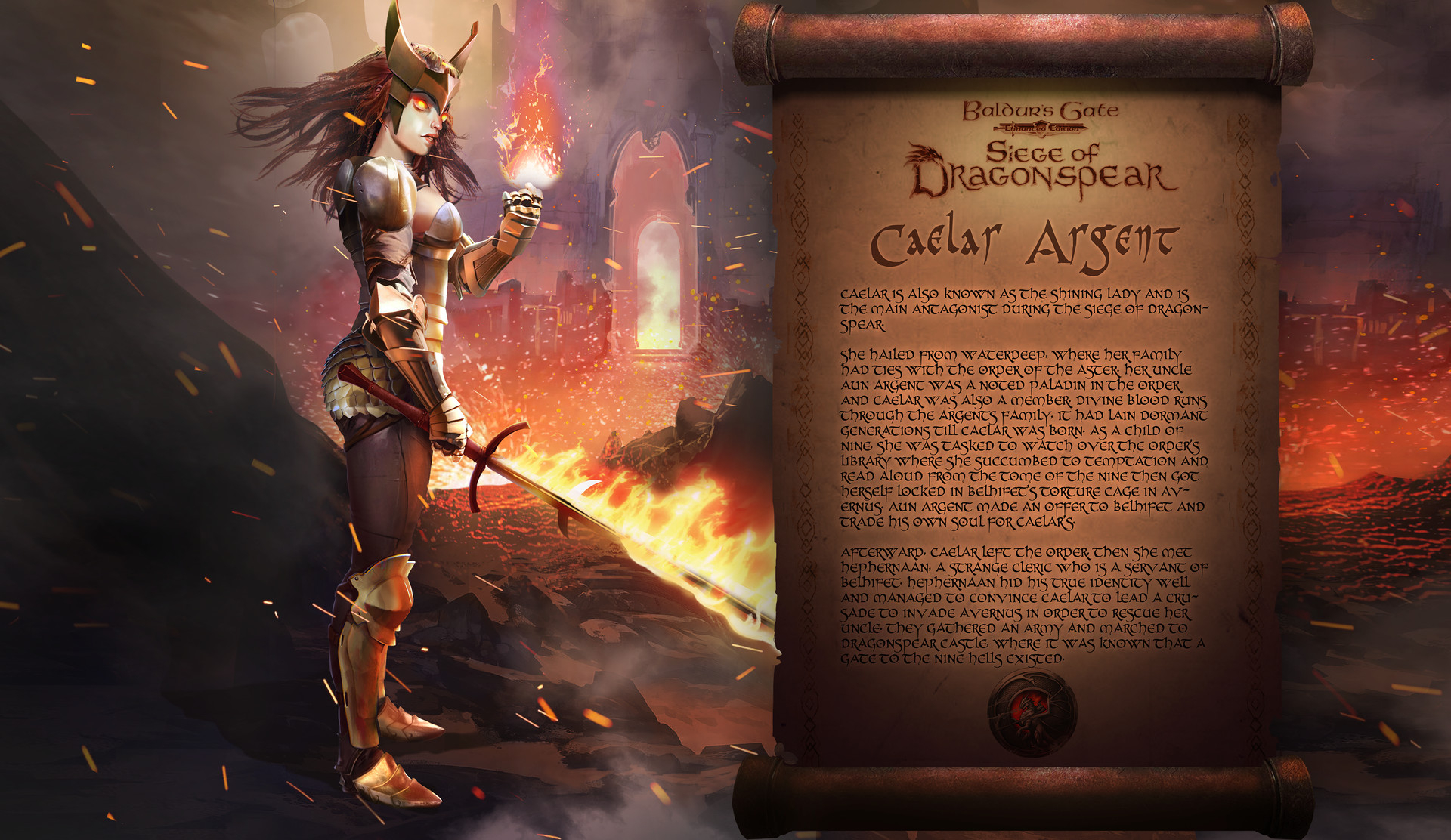 Safana. Baldur’s Gate II provides stories for a few BG1 NPCs, whose stories were changed in SoD. For example, Safana is supposed to be the main substitute for Imoen during SoD, but in BGII she still acts as in 2000, with no explanation why she became so hostile to the main character with whom, supposedly, she travelled to Avernus, and back, and with whom she could even have a romance in SoD.

Skie is killed in SoD, and it is very heart-breaking to every player, because there’s no resolution to this story. During one of the livestreams it was revealed the Soultaker quest was planned for Baldur’s Gate II:Enhanced Edition but it was cut. [2] As of now, there’s a plot hole in the storyline: what happened to Skie, what happened to the Soultaker, did Irenicus use this powerful dagger? Questions, without any answers.

Corwin and Glint. The Siege of Dragonspear introduced new romances. There’re players there, for whom these romances are the best, and whose characters will forever be in love with Corwin, or Glint. Again, with all the power the main character gets in Shadows of Amn and Throne of Bhaal, this character, being in love with a SoD-only NPC, would do everything to return and take this NPC into his or her party. 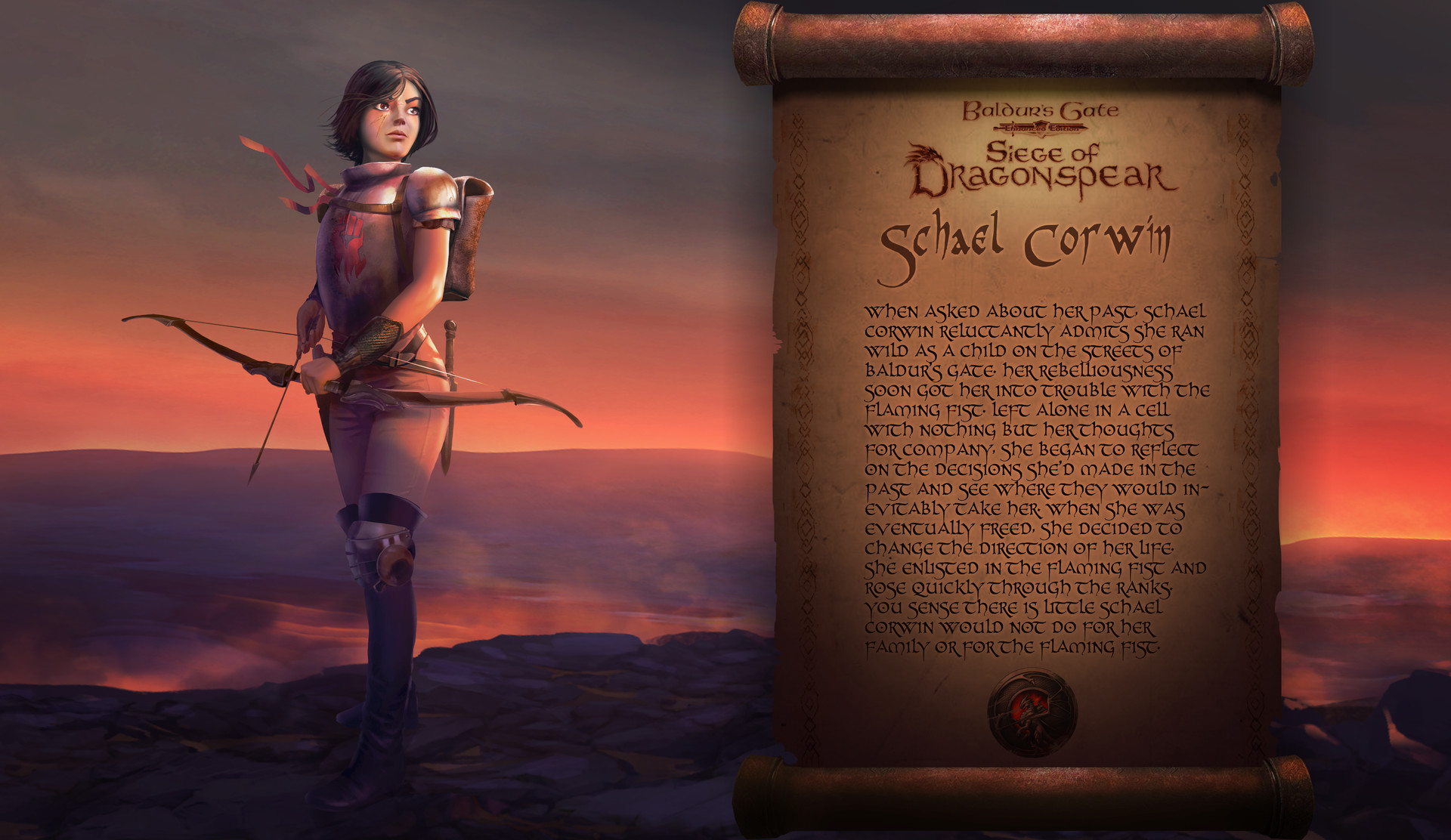 These were just 4 of numerous examples why content related to the Siege of Dragonspear would be welcome by players. We don’t talk about a free patch, we understand creating such content is diffucult and pricey effort. This is why we ask Beamdog to create and release a paid DLC to continue stories started in Siege of Dragonspear.

THE MOST POPULAR COMMENTS

These are the results from the Russian social media (and this is while Siege of Dragonspear is not even translated into Russian). 73% of the users who voted in the Poll “Do you want the story of Caelar Argent to be continued?”, voted for “YES, very much”, 17% don't mind having this content and only, 2% accept the new content but with additional conditions and only 8% are against adding it . [7]

For the last year, the most popular request after every licestream, was about Siege of Dragonspear-related content for Baldur’s Gate II:Enhanced Edition. Let us just quote players (and check out big amounts of reactions those posts got): Even a member of the development team admitted the need to finish the Soultaker plot: “Good news! Hopefully those devs that just finished the 2.5 patch series can now focus on fixing the Soultaker plot hole.” [18]

To finish our community letter, we would like to share this amazing Siege of Dragonspear fanart. Fanart can go a long way to show how much the game means for people. Please, Beamdog, create new Siege of Dragonspear-related stories, so that our biggest dreams could come true.